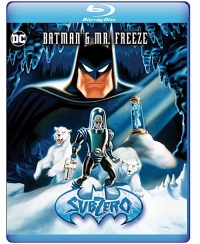 All right, we’re starting the new week this afternoon with a trio of fresh Blu-ray reviews…

First up, Tim has checked out Scalpel (1977) on BD from Arrow Video, as well as Val Guest’s When Dinosaurs Ruled the Earth (1970) from the Warner Archive Collection.

I’ve also just posted my thoughts on the Warner Archive’s long-awaited Batman & Mr. Freeze: SubZero on Blu-ray, a great upgrade of the original direct-to-DVD release and a nice aperitif for their upcoming release of the complete Batman: The Animated Series on Blu-ray later in 2018. Enjoy! [Read on here...]

Speaking of the Warner Archive Collection, the label announced at WonderCon 2018 in Anaheim this weekend that they’re working on new Blu-ray releases of Sergio Leone’s Colossus of Rhodes (1961) and also Jack Cardiff’s mercenary actioner Dark of the Sun (1968). We’ve been asking for Colossus on Blu-ray for a while now – it’s the final Leone film not yet available on BD – and Dark is a great catalog title as well. We’re looking forward to both of them.

In other release news today, retail sources are reporting that Sony’s Peter Rabbit will be released on Blu-ray, DVD, and 4K Ultra HD on either 5/1 or 5/8 (Target shows 5/1, while Best Buy shows 5/1 for BD but 5/8 for 4K). We expect the title to be officially announced shortly which should clarify the date.

And while we’re on the subject of 4K Ultra HD, we’ve obviously been very aggressive in reporting news of great classic and catalog titles coming to the format in early 2018 – and there certainly has been a lot of news to report. But many of you have asked about possible catalog titles coming later in 2018.

Generally, it’s a good idea to look at catalog titles that celebrate major anniversaries as an indicator of possible, as-yet-announced titles. We should stress here that – except where noted – our sources HAVE NOT YET reported the following films as being in production for either Blu-ray or 4K release later this year, but we’re certainly asking about them. With that in mind, here’s a list of possibilities…

Warner films that celebrate major anniversaries in 2018 (beyond the already-announced 2001) include The Right Stuff (35th) and Superman: The Movie (40th). Both would make obvious choices for 4K release.

Universal films celebrating anniversaries this year (beyond Jurassic Park) include The Big Lebowski (20th). We do know that this title is coming to 4K sometime this year (as is Ridley Scott’s Robin Hood).

Possible Sony titles with anniversaries this year include Rudy (25th) and Philadelphia (25th).

A possible Paramount title (beyond Grease) would be The Truman Show (20th). We also know that all of the Mission: Impossible films are coming to 4K later this year.

Though they’re not anniversary titles, we’ve reported before that Lionsgate is working to being the Rambo films to 4K later in 2018.

Finally, Fox films that celebrate major anniversaries this year (beyond Die Hard) include Master and Commander: The Far Side of the World (15th), The X-Files: Fight the Future (20th), Planet of the Apes (50th), and Chitty Chitty Bang Bang (50th – an MGM/United Artists title distributed by Fox).

Of the speculative titles mentioned above, The Right Stuff and Superman seem the most likely to be released on 4K Ultra HD this year, though we’d LOVE to see Master and Commander in 4K as well. Again, though, please do keep in mind that we have no specific information as yet that any of these titles are coming. If we hear anything concrete from our sources, we’ll be sure to report it here.

One last thing we wanted to mention on this subject, because it’s a question we get asked all the time: “When are James Cameron’s The Abyss and True Lies going to be released on Blu-ray?” The answer is, we don’t know… but we have heard that 4K preparations are being (or have been) made for both films. It’s also worth noting that 2019 is the 30th anniversary of The Abyss, as well as the 25th anniversary of True Lies. So it seems likely that we won’t see either of them on BD or 4K until next year at the earliest.

Finally today, I had the chance to see Wes Anderson’s new Isle of Dogs this weekend, and it’s really terrific. It’s a stop-motion animated film in the spirit of Fantastic Mr. Fox, but it’s also Anderson’s love letter to Japanese cinema, as well as Anderson at his most Anderson, if you take my meaning. If that appeals to you, you should really dig this film. If it doesn’t, the experience might be a bit off-putting. I loved it though; I found myself laughing through the entire film. There are references to classic works of Akira Kurosawa (especially his noirish Stray Dog, High and Low, and The Bad Sleep Well), as well as Hayao Miyazaki, Yasujiro Ozu, and many others. If you’re an Anderson fan, it’s a visual and textual feast.

Just a quick heads-up: AMC’s new The Terror series starts tonight, as does the 4K nature documentary One Strange Rock on National Geographic. Be sure to set your DVRs if you’re interested in either of them.
That’s enough for now. Back tomorrow!