IT’S OFFICIAL: The Lord of the Rings Trilogy & The Hobbit Trilogy arrive on 4K Ultra HD on 12/1! 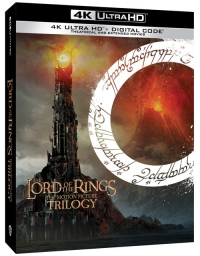 All right Tolkien fans, this is it!

Warner Bros. Home Entertainment has just provided us with the official confirmation: Peter Jackson’s The Lord of the Rings Trilogy and The Hobbit Trilogy will officially arrive on 4K Ultra HD on 12/1.

All six films have been fully remastered by Weta Digital in New Zealand in a process overseen by director Peter Jackson. For The Lord of the Rings, this includes new 4K scans of original camera negative and new 4K scans of the original VFX film outs. The Hobbit films were shot digitally in 5K.

All six films will include Dolby Vision and HDR10 High Dynamic Range. Each will also include Dolby Atmos audio. (Note that The Hobbit films will NOT include HFR high frame rate—they were shot in 48 fps, but 4K UHD supports 60 fps.)

So you can buy the films in 4K now, or wait if you wish for the truly ultimate box set with new bonus content and remastered Blu-rays too. Our hats off to Warner Bros. Home Entertainment for letting people know that in advance.

Here’s great news too: The SRP for each trilogy is just $89.99, which means sale prices will take them even lower.

Audio options on the 4K discs will include English (Dolby Atmos), Latin Spanish, Canadian French, and Brazilian Portuguese. Subtitles on the US release will include English SDH, Latin Spanish, Canadian French, and Brazilian Portuguese. There are no extras in either trilogy (ie the audio commentaries are not included). And the extended editions are split over two 4K discs to allow for maximum video data rates.

And here’s a look at the cover artwork...

This is the wide release version of The Lord of the Rings Trilogy (click on the art to pre-order on Amazon.com now)... 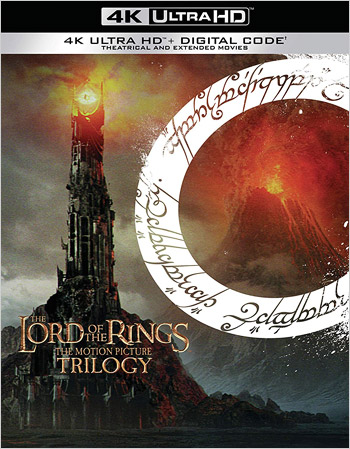 Here’s the wide release version of The Hobbit Trilogy (click on the art to pre-order on Amazon.com now)...

Amazon and other retailers also have a wide release The Lord of the Rings Trilogy Gift Set with The One Ring replica (SRP $139.99—click the image to pre-order it on Amazon.com now)...

Amazon may also have an exclusive The Hobbit Trilogy Gift Set (we’ll add that when available).

Meanwhile, Best Buy will have 4K Steelbook exclusives that same day. Here’s what The Lord of the Rings Trilogy looks like... 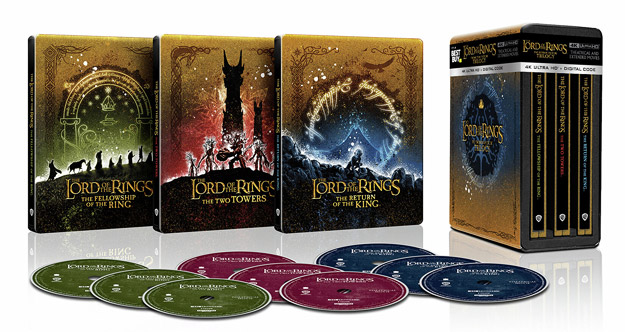 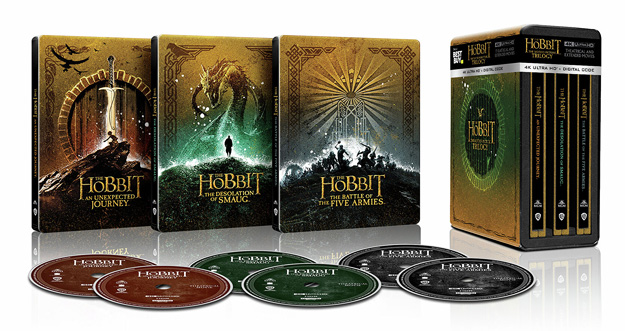