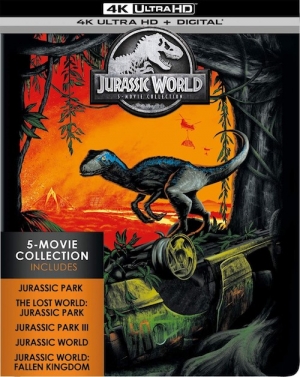 All right, let’s have a quick update with more breaking release news…

Many months after we first told you it was coming, Universal is finally bringing The Big Lebowski to 4K Ultra HD on 10/16, with both regular and limited editions available (the latter can be seen below, packed with swag). We’re awaiting the official announcement, but both are now listed for pre-order on Amazon.com (click here and here to see them).

Also, the studio is releasing a Jurassic World: 5-Film Collection on 4K Ultra HD on 9/18, day and date with the home video release of Jurassic Park: Fallen Kingdom on Blu-ray, DVD, and 4K. So those of you who waited to pick up all the earlier films in 4K hoping for a 5-film box, now’s your chance. You can see the cover art art right and you can pre-order it here.

Note that we’ve updated the 4K Ultra HD Release List here at The Bits with this information and pre-order links for a number of additional upcoming 4K titles. [Read on here...]

Heads-up: Our friends at @mvdentgroup are having a Flash #sale, up to 60% off SRP on Cleopatra Entertainment #Bluray and #DVD titles, starting now and running through Friday, October 1st. Stock up while you can! mvdshop.com/collections/cl…