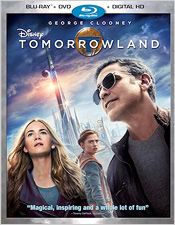 What happened to our sense of optimism and wonder? Where’s that amazing future we were all promised as kids? Those are the key questions asked by Disney’s Tomorrowland, a film directed by Brad Bird (The Iron Giant, The Incredibles) and co-written by Bird with Damon Lindelof (Lost, Prometheus).

The film opens in 1964. Young Frank Walker (Thomas Robinson) travels to the World’s Fair with his homemade jet pack, hoping to win a prize for invention. The contest’s judge, Dr. David Nix (Hugh Laurie) is unimpressed, but Frank does attract the interest of Nix’s assistant, a young girl named Athena (Raffey Cassidy). She reveals a stunning secret to Frank: The world’s greatest inventors and dreamers have created a secret city in an alternate reality, built to help secure the future of all Humanity. Athena invites Frank into this Tomorrowland and suddenly his own future looks bright indeed. Then we jump to the present day… and discover that this bright future never materialized. We meet Casey Newton (Britt Robertson), a teenage girl who still dreams of the future even as the rest of the world has given up on it. Casey is the daughter of a laid-off NASA engineer and she’s been trying to prevent the Government from demolishing NASA’s last remaining launch pad. This attracts the attention of Athena who, strangely, appears not to have aged in the past fifty years. Athena gives Casey a coin which offers her glimpses of Tomorrowland, and sets Casey off in search of a way in – a search that leads her to a now grown, bitter, and disillusioned Frank Walker (played by George Clooney). Something has obviously gone wrong with Frank’s life and the hopeful promise of Tomorrowland, and it’s up to Casey, Frank, and Athena to set it right and save the future.

I have a ton of admiration for Brad Bird, and I love what he tried to do here. I love the raw optimism on display in this film; that sense of “Come on, people! Wake up and let’s start making that better future we all want!” Tomorrowland starts off quite well, but unfortunately derails itself due to a script that can’t fulfill its own promise. Essentially, this film promises its audience something amazing... then delivers nothing of the sort. It hints at wonders just over the wall, down the rabbit hole, and right on the other side of our own reality… and it even gives us glimpses of them… but then delivers only a failed vision, a stock villain, and a clichéd plot twist. To say any more would be to spoil the story. Suffice it to say that the build-up here is a lot more enjoyable than the payoff.

When you first put Disney’s Blu-ray in your player, you’re asked to select between the following languages: English, English SDH, French, Spanish, and Portuguese. Then you’re shown optional previews for the Disney Movies Anywhere service, the theatrical release of Star Wars: The Force Awakens, and Pixar’s Inside Out on Blu-ray. The film itself looks terrific in 1080p/2.20:1 high-definition video. Tomorrowland was shot digitally in 4K using Sony CineAlta cameras. Detail is excellent, with terrific color and contrast. It’s close to a reference quality image. Audio is present in English 7.1 DTS-HD Master Audio, English 2.0 Descriptive Audio, and French, Spanish, and Portuguese 5.1 Dolby Digital (with optional subtitles in those same languages). The surround mix is lively and immersive, with a smooth soundstage, excellent dynamics, and more than sufficient low-end support. Dialogue is clear at all times and Michael Giacchino’s score is well presented in the mix. Overall, this is a fine A/V presentation.

The disc’s extras include a series of behind-the-scenes featurettes. Remembering the Future: A Personal Journey Through Tomorrowland with Brad Bird (7:09) gives a few insights into the inspiration for this film for Bird and Lindelof. Casting Tomorrowland (7:27) details the process of finding the right actors for the film and what they each brought to it. A Great Big Beautiful Scoring Session (6:03) offers a look at the creation of the score with composer Michael Giacchino and his team. The World of Tomorrow Science Hour – Hosted by Futurologist David Nix (5:08) is a set of in-universe outtakes from a 1960s Disney TV show that I assume was meant to be seen in the film to set up the Nix character’s backstory. There are a pair of Brad Bird Production Dairies (4:34 minutes in all – including The First Day and NASA) that are cool, but unfulfilling. You’d link there should be a lot more of them on the disc, but they aren’t. Maybe there are more online somewhere. There’s also an vintage-styled animated short (that can be viewed separately or as an opening to the film), The Origins of Plus Ultra (3:26), which provides a little backstory for the origins of Tomorrowland itself, as well as a TV commercial for the Blast from the Past store seen in the film (:41). Finally, there are six Deleted Scenes with filmmaker introductions (23:29 minutes in all – including Joking on The Eiffel Tower, Young Casey vs. The Volcano, Doomsday Living Room, As Originally Written Casey the Downer, What Happened to Tomorrowland?, and What Is Tomorrowland?). Some of the scenes are significantly different that what appeared in the final film, including the addition of Casey’s mother and extended family, and even a different take on Casey’s character. Clearly, this film’s story was still evolving even during shooting. The package also includes a bonus DVD copy of the film, along with a code for a Digital Copy version too.

While Disney’s Blu-ray certainly delivers fine quality and decent extras, none of it can save this film from its own shortcomings. Sadly, Tomorrowland feels incomplete – just two-thirds of a great movie experience. Its story runs out of steam just as things should be getting most interesting. But even if Tomorrowland ultimately disappoints, the attempt was admirable and the ride is still worth taking. Just keep your expectations low.

If you haven't, you should be listening to @TheExtrastv, an excellent podcast that dives deep into home video restorations with the folks behind them. This week, he'll be covering the restoration of THE GODFATHER TRILOGY with James Mockoski & Robert Shafer theextras.tv/podcasts/blog-…