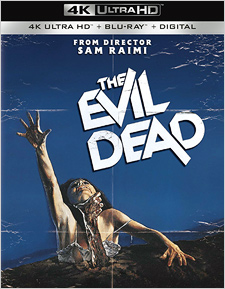 [Editor’s Note: The film portion of this review is by Tim Salmons and the A/V portion is by Bill Hunt.]

In a decade when horror films were coming out of every corner of the world with a wide spectrum of qualities, Sam Raimi’s 1981 feature The Evil Dead managed to achieve a kind of imperfect greatness in spite of itself. Made over several years with the cast and crew on location in Tennessee, spending cold nights huddled for warmth and risking life and limb to finish it, it’s a wonder that anything salvageable came out of it at all. Even by today’s standards, it’s still a grueling piece of horror, barely held together with duct tape, Fake Shemps, and raw talent.

Even with its myriad of imitators, as well as advancements in low budget filmmaking, The Evil Dead somehow remains pure, capturing an aesthetic that its contemporaries rarely, if ever, even got close to. Its charm is mostly in its simplicity. At its base, a story about a group of kids staying at a cabin in the woods for a fun weekend and being subsequently possessed by demons makes for an unsophisticated viewing experience. Even on grainy 16mm film, the film holds up as a remarkable calling card for Sam Raimi, one of the most respected and beloved filmmakers to come out of the genre. It also made a cult hero out of its star Bruce Campbell, leading to future installments in the Evil Dead franchise, as well as many other projects on both the small screen and the big screen.

The Evil Dead was shot photochemically in 16 mm using Arriflex cameras and spherical lenses. It was finished on film and released theatrically in a 35 mm blow-up at the 1.33:1 aspect ratio. For this release, the original camera negative has been scanned in full native 4K, with High Dynamic Range grades in both HDR10 and Dolby Vision. Given its vintage and capture format, you can’t expect The Evil Dead to look like a modern feature film. This is, always has been, and ever should be, a grain monster. There are also many shots that are optically soft as filmed. But… you’ve also surely never seen this film looking so good before. Every bit of the detail and texture in the negative is visible, the colors are richer and more stable than ever, and the overall contrast is dramatically improved, with deeper blacks, stronger highlights, and much more definition in both, as well as a broader range from bright to dark. The Dolby Vision option adds a tad more color depth and dimensionality (if your display can make use of it), and it does help to optimize the image in the film’s darker moments.

Audio-wise, this is the same 5.1 Dolby TrueHD mix that was found on the previous Blu-ray edition from 2010 (reviewed here at The Bits). It’s quite good, especially when hell starts breaking loose. The mix is well-balanced and it’s appreciated that the audio engineer resisted the temptation to boost the big scare moments more than was necessary when creating it. Those moments are still strong, but not so much that you’re sent scrambling for the remote to turn it down before your neighbors call the cops. There’s good ambience here, with precise staging, and a moderate foundation of bass. Dialogue is clean and the music is presented with good fidelity. Spanish Dolby Digital 5.1 audio is also available and optional subtitles are included in Spanish too.

Both the 4K disc and its accompanying Blu-ray, the latter of which features the film in 1080p (as well as offering 1.85:1 or 2.35:1 viewing options), contain only one special feature:

The special features found on the film’s previous DVD and Blu-ray releases (including additional audio commentaries, outtakes, documentaries, featurettes, and trailers) are sorely missed. The package does at least include a paper insert with a Digital code.

Lionsgate’s 4K release of The Evil Dead is highly recommended for fans of the film. While it’s far from reference quality, this is the easily best version of the film for home viewing. And while the lack of extras is irritating, this disc is at least priced appropriately (less than $20 at the time of this review).

Today on The Bits – The Goonies #4K is up for pre-order on Amazon, plus new #Bluray reviews, word of more #UltraHD catalog titles, and a neat video that proves @StanleyKubrick was ahead of his time thedigitalbits.com/columns/my-two…

Heads-up: The upcoming #4K #UltraHD #boxset release of The Goonies is now up for pre-order (Note: a Standard Edition #UHD is likely to follow). amazon.com/exec/obidos/AS…