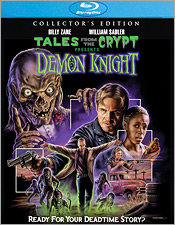 Tales from the Crypt Presents Demon Knight came along right at the perfect time for me. I had been an avid watcher of the original TV show, and when I was in 8th grade, Demon Knight was released (as well as its sequel Bordello of Blood a year later). Also around that time, From Dusk Till Dawn and The Frighteners were hitting the scene, so horror comedy fans were simply spoiled for choice. They were the perfect movies for a 13 year old horror fan like me.

Demon Knight also seemed to do dynamite business when it hit home video, which is where most of us discovered it at that age. The TV show was running its course and the creators were interested in changing venues. Demon Knight as a script had actually been floating around since the 1980’s, and Universal was looking at it as well as several other scripts for potential investment in the Tales from the Crypt franchise. Although it wasn’t originally slated to be the first one out the door, Demon Knight was chosen and was given a rewrite to make it feel more like a Tales from the Crypt property. Relatively new director Ernest Dickerson, who had been a cinematographer for many years before turning his eye towards directing, was chosen to head the project with a cast of familiar faces including Billy Zane, William Sadler, Jada Pinkett Smith, Dick Miller, Thomas Hayden Church, CCH Pounder, Charles Fleischer, and Brenda Bakke.

Demon Knight tells the story of Brayker, a man who is on the run from a demon known as The Collector. The Collector is attempting to acquire one of the seven keys of darkness that Brayker has in his possession. Finding himself holed up in a desert hotel in the middle of nowhere, Brayker endeavors to last the night with a ragtag group of locals while The Collector attempts to sway them one by one into getting what he wants.

While the movie plays it pretty loose tonally, it never feels heavy-handed or out of touch. Dickerson’s choice of using a lot of Dutch angles keeps the look of the movie rooted in its comic book origins, but at the same time having as much fun as possible. The creature and gore effects, the performances, and the show-stealing performance from Billy Zane, make for one of the most enjoyable horror comedies to come out of the 1990’s, at least in my opinion. It also helps that the movie opens and closes like an episode of Tales from the Crypt, with patented Cryptkeeper banter and all. It holds up remarkably well and plays just as well as it did in 1995.

The transfer found on Scream Factory’s new Collector’s Edition Blu-ray release of the movie is a welcome one. It’s a strong presentation that’s pretty faithful to its film source. Because the movie reuses the footage that opened and closed the Tales from the Crypt TV show, as well as implementing many optical effects, there’s an occasional softness to it. Overall though, the footage is quite sharp with some nice grain levels from scene to scene. The color palette is also quite strong with very naturally-appearing skin tones. Black levels are very deep with some excellent detailing in the shadows, as well as very satisfying contrast and brightness levels. There’s some very minor film debris leftover from time to time, which is not much more than some black speckling, but there’s been no digital augmentation carried out. As for the audio, you get two choices: English 5.1 and 2.0 DTS-HD. Both are great, but the 5.1 track is much more immersive. Ambient noise and sound effects fill the surrounds with plenty of speaker to speaker activity, with the score backing things up nicely. There’s also some nice use of LFE. The dialogue is mostly clear, although mixed a bit too low at times. Overall, it’s a terrific presentation on both fronts. There are also subtitles in English for those who might need them.

As for the extras, there’s some good stuff worth digging into. There are two audio commentaries, one with director Ernest Dickerson and moderated by Michael Felsher, and the other with special effects creator Todd Masters, visual effects supervisor John Van Vliet, special effects coordinator Thomas Bellissimo, and demon performer Walter Phelan. There’s also a terrific making of documentary entitled Under Siege: The Making of Demon Knight, which features most of the main cast and crew. In addition, there’s a Q&A panel discussion from the American Cinematheque with Dickerson, actor Dick Miller, and special effects maestro Rick Baker; a still gallery; and the movie’s original theatrical trailer. I’m sure that there’s also probably some EPK material floating around out there, as well as some TV spots (which I seem to remember from the time), but I’m sure licensing had more to do with their non-inclusion.

Tales from the Crypt Presents Demon Knight on Blu-ray from Scream Factory is a more than welcome release of a movie that previously got very little home video fanfare, let alone Collector’s Edition status. Long-time fans of the movie (like myself) will eat up this release and its counterpart Bordello of Blood with relish. It’s a terrific disc with a wonderful documentary to go with it, and it makes the 13 year old version of me very happy. Highly recommended.

Today on The Bits – In the Heat of the Night hits #4K on 4/19, plus The Untouchables, The Sleeper Must Awaken, Peter Robbins RIP & more thedigitalbits.com/columns/my-two…