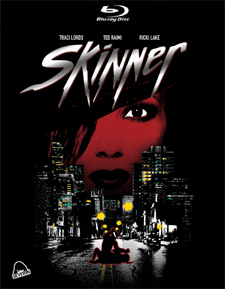 Accused of imitating or just flat out ripping off The Silence of the Lambs for many years (which was totally unjustified), 1993’s Skinner turned a lot of heads, but unfortunately in the wrong direction. Hated upon almost immediately, it’s a slasher film that came and went, but was never forgotten by hardcore horror fans throughout the 1990s and beyond.

Dennis Skinner (Ted Raimi) is a seemingly normal drifter moving from place to place when he happens upon a house with a room for rent. The home’s owner (Ricki Lake) enjoys having Dennis around for company, despite her husband (David Warshofsky), who disapproves. What they don’t know is that Dennis is actually a serial killer, going out at night and kidnapping prostitutes to skin them alive and wear them around like clothing. On his trail is his only survivor (Traci Lords), a scarred and deeply-disturbed woman looking for some revenge while staying at a nearby motel run by a sleazy owner (Richard Schiff).

Skinner is one of the nastier offerings form the 1990s, a period in which a lot of low budget horror films were going straight to video, bypassing theatrical altogether. In the case of Skinner, it had controversy surrounding it due to director Ivan Nagy’s association with Heidi Fleiss, who many will remember as the “Hollywood Madam.” The film is also quite downbeat, despite Ted Raimi’s over-the-top performance. But its most controversial aspect is a scene in which Dennis wears the skin of a black man and imitates him, meaning that he is literally wearing black face. Although I doubt the intentions behind it were motivated by racism, it’s quite indefensible.

It’s also odd to see Ricki Lake and Traci Lords outside of a John Waters movie. While Lake is basically the only real innocent character in the film, Lords really goes for it, completing her ensemble with an overcoat, her hair hanging down over half of her face, and even exhibiting a limp, making it clear that Dennis really did a number on her.

Most of all, Skinner feels like a low budget film that’s really trying. Due to Nagy’s background in photography, the film looks good and is actually effective in how dark it goes. Some of the performances are lacking, but the execution of it, including the completely disgusting special effects that were originally deleted for its R-rated release, hold up remarkably well. It’s not a fun film to watch, but better than its reputation would lead one to believe.

Severin Films debuts Skinner on Blu-ray via a brand new 4K scan of the uncut version of the film from the original 35mm camera negative. It’s a solid presentation through and through. While there are some leftover imperfections, such as speckling, it’s organic in appearance with nice grain levels and loads of fine detail. The color palette is quite varied, showing off some bold uses of blue, red, and green, but also revealing natural skin tones. Blacks are deep and inky while overall contrast and brightness levels are satisfactory.

The audio is presented in English and French 2.0 DTS-HD with optional subtitles in English SDH. It’s a nice stereo presentation that actually offers some atmospheric activity, but not a lot in terms of panning or spatial movement. Dialogue is discernable and sound effects have plenty of impact, while the score and music selection sometimes doesn’t quite mix together that well with the other elements. However, there are no instances of distortion, nor is there any leftover hiss, crackle, or dropouts.

The extras on this disc really put the film in a different light and make it fascinating to learn about. Starting things off is A Touch of Scandal, a 20-minute interview with director Ivan Nagy, who goes over his history, including his escape from Hungary, going to college and meeting Francis Ford Coppola, how he got into making movies, making Skinner, his history with Heidi Fleiss, and what came afterwards. Next is Under His Skin, a 15-minute interview with actor Ted Raimi, who goes over his early movie career, how he was cast, his reaction to the film’s critics, and why he thinks people are drawn to characters like Dennis Skinner. Then there’s Bargain Bin VHS For a Buck, a 17-minute interview with screenwriter Paul Hart-Wilden, who discusses his inspiration for writing the film, initially disowning it, and the journey he later went on in order to locate all of the film elements for its release which were scattered and lost (by far the best interview on the disc). Next is Cutting Skinner, an 11-minute interview with editor Jeremy Kasten, who left the film industry to become a farmer and sheds light on the film’s fascinating post production woes. Closing things up is a 12-minute set of outtakes & extended takes from the film’s infamous “Flaying Sequence” (which runs silent with some of the film’s music underneath), and the film’s (apparently unused) VHS trailer.

Skinner is a no-holds barred, disgusting and disturbing film, but also equally fascinating given the people who are in it, the people who made it, and what became of it later on. Although I was hesitant to check it out as I was expecting something a little less interesting, I found myself engaged with it, particularly the extras. Severin has really put together a fine package that slasher fans should be more than happy with.