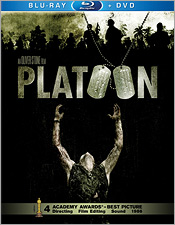 “Somebody once wrote: ‘Hell is the impossibility of reason.’  That’s what this place feels like: Hell.”

Platoon, released in 1986, was Oliver Stone’s first take on the Vietnam War, based on his own personal experiences.  It was also the first financially successful film of his career.  Many war films were made during that decade (including Stone’s own Born on the Fourth of July and Kubrick’s Full Metal Jacket), but Platoon tends to stand apart from them story-wise.  The sympathetic character of Taylor (Charlie Sheen), being the primary focus, is the anchor for the audience’s emotions throughout the film.  We see a clean-cut college kid turned into a killing machine and coming out of it mentally scarred.  Such is usually the case in these films, but we as the audience go through the actual experience here rather than being dropped into the middle of it.  In this way, Platoon tends to play like a normal dramatic film usually does, making it a more commercial piece.  On the other hand, the film also portrays the horrific aspects of war and asks us to question things with a strong moral outlook.  Listed by many as one of the greatest war films of all time, Platoon continues to enjoy an enduring legacy and reminds us what a strong writer/director Oliver Stone really is.

For this 25th Anniversary Edition release of the film on Blu-ray, we get a very solid package.  The A/V presentation is only merely good.  At times, the images appear a bit too clean and too soft to me.  The visual detail is mostly there, and while some of the subtle aspects of the frame do benefit from the high definition, others look too smooth.  This probably means there was some digital noise removal going on, which is bad news.  On the positive side of things, the colors are nice.  While there isn’t a broad color palette to speak of (since most the film is concerned with greens, tans and blacks), they’re all represented well.  Skin tones look quite natural.  The forest scenes have some nice depth to them and the night scenes offer some deep blacks.  The contrast is very low, but the images are bright enough without the need to pump more saturation into them.  The film’s grain levels are all over the place.  In some scenes there’s an even texture, while in others the grain amount varies widely.  To be fair, this isn’t a totally wasted effort, but the film could have looked a bit better.

In the audio department, you get a multitude of different language options including English 5.1 DTS-HD, English 4.0 Dolby Surround and Spanish and French 5.1 Dolby Digital.  The lossless track doesn’t do the film justice.  It’s a very weak surround experience and lacks dynamic range.  There doesn’t seem to be any sweetening to the music or sound effects either.  They’re thin and unimpressive sounding just when you want them to be at their best.  Dialogue is clear and audible, but also lacks any real punch.  It’s a disappointing track, especially for a war film where you want people to feel the emotion sonically with loud explosions, gunfire and music.  Subtitle options include English SDH, Spanish, French and many, many more.

Supplementing this release are nearly all of the extras from the previous DVD releases.  What you get are the following: an audio commentary with Stone; another commentary with military advisor Dale Dye; deleted and extended scenes; the Flashback to Platoon section containing the featurettes Snapshot in Time: 1967-1968, Creating the ‘Nam and Raw Wounds: The Legacy of Platoon; the Documentaries section containing One War, Many Stories and Preparing for ‘Nam; the Vignettes section containing Caputo and the 7th Fleet, Dye Training Method and Gordon Gecko; TV spots and the film’s theatrical trailer.  Absent here are the Tour of the Inferno documentary and stills gallery, both from the previous special edition DVD releases.  It’s still a nice set of extras, but fans and collectors may want to hang on to their older DVDs if they want everything.

Oliver Stone would go on to explore the Vietnam War further in his later films and also tackle subjects ranging from serial killers to political leaders.  But it’s Platoon that really gave him a serious directing career and an audience eager to view his work.  This film has been released so many times on Laserdisc, VHS and DVD that I personally would like to see it lay low for a while.  A truly ultimate Blu-ray release in the future could be a wonderful thing, complete with a really great transfer and a properly mixed soundtrack.  For now, this is still the best way to experience the film, even if it’s lacking in some areas.