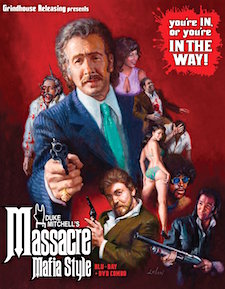 Massacre Mafia Style (aka Like Father, Like Son or The Executioner) attempts to do something ambitious: to out-Godfather The Godfather. It never fully approaches that plateau, but from an exploitation standpoint, it certainly gives it a run for its money. When Mimi (Duke Mitchell) and his old friend Jolly (Vic Caesar) meet up in Los Angeles, they rain a bloody storm of bullets on the Sicilian families that live there in an attempt to regain territorial control. Mostly hidden under wraps for years as a VHS cult film, Massacre Mafia Style comes roaring back to life in a wonderful package from Grindhouse Releasing.

Opening with a bang as the two men blow away a building full of people one by one, Duke Mitchell doesn’t hold anything back. With a feeling of authenticity, a touch of poetry, and a lot of bloodshed, Massacre Mafia Style is violent as hell, going for the throat and parts beyond. Not only does Mitchell direct his own personal take on the modern mob movie, but he also self-finances, writes, produces, and stars in it as well. He attempts to convey what he believes that kind of life was truly like, as he was witness to much of it in his day job as a crooner for local nightclubs. It truly is one of the ultimate examples of extreme independent filmmaking, having been made by someone with more ambition than most would dare dream.

For a film that’s been sitting in cans for decades, Massacre Mafia Style looks terrific in its Blu-ray debut. It comes sourced from a new high definition digital restoration of the original director’s cut of the film with the title Like Father, Like Son attached to it. Surprisingly, it’s one of the most film-like presentations that you’re likely to ever come across. Beginning with a high level of well-retained film grain, it captures an enormous amount of fine detail and texturing on both objects and people. Colors of all shades are also bold with natural skin tones and deep black levels. Brightness and contrast levels are also satisfactory, and while some minor damage such as film scratches is present, there’s almost nothing to complain about otherwise. The sole audio option is an English 1.0 DTS-HD track, which represents the film quite well. It contains some irreparable damage, but the new-found clarity of the dialogue, sound effects, score, and song selection trump any negative aspects of it. It’s also quite clean and crisp with a real punch to it, especially when it comes to the blasts from the guns. It’s a wonderful presentation, but unfortunately, no subtitle options are provided.

There’s also a massive amount of engrossing and well-put together supplemental material that will take you quite a bit of time to dig through. There’s the Like Father, Like Son documentary; a brief interview with Matt Cimber and Jim LoBianco; almost one hour of Duke Mitchell's home movies, which also includes audio from a Duke Mitchell live performance; the film’s theatrical trailer; a set of 5 radio spots; a set of still galleries (production stills and materials, color stills, theatrical, home video, and Duke Mitchell); Duke Mitchell’s filmography with options to watch the trailers for Gone with the Pope and Bela Lugosi Meets a Brooklyn Gorilla; Cara Salerno’s filmography with a nude still gallery and a trailer for Space Thing; trailers for other Grindhouse Releasing titles (Cannibal Ferox, Cannibal Holocaust, The Beyond, Pieces, An American Hippie in Israel, Corruption, The Big Gundown, The Swimmer, Gone with the Pope, The Tough Ones, Ice House, Poor White Trash 2, Cat in the Brain, I Drink Your Blood); a set of disc production credits; the actual film of Bela Lugosi Meets a Brooklyn Gorilla with a trailer and still gallery; An Impressionistic Tribute to Jimmy Durante TV special with a set of 16mm dailies; DVD-ROM extras that include PDF files of two script treatments, two versions of the screenplay, and notes used for the film’s narration; a 12-page insert booklet with liner notes by journalist David Szulkin; and a DVD copy of the film. There are also two Easter eggs to be found buried in the menus, which are both additional interview segments with Matt Cimber. Left off of this release is material from a self-distributed DVD released by Jeffrey Mitchell, which featured a longer version of the Like Father, Like Son documentary, an additional live performance from Duke Mitchell, and three separate audio commentaries with Jeffrey Mitchell, Frankie Ray, and George Jacobs.

Describing what Massacre Mafia Style is to a stranger just isn’t possible. You can’t really give them a firm grasp on what to expect from it before actually seeing it. It’s a hard-nosed crime actioner with a touch of drama and a lot of chaos thrown in, but that’s only the beginning. Grindhouse Releasing’s presentation of it is terrific, and film fans will appreciate it more than anybody. As the film’s tagline suggests, “You’re IN, or you’re IN THE WAY.” 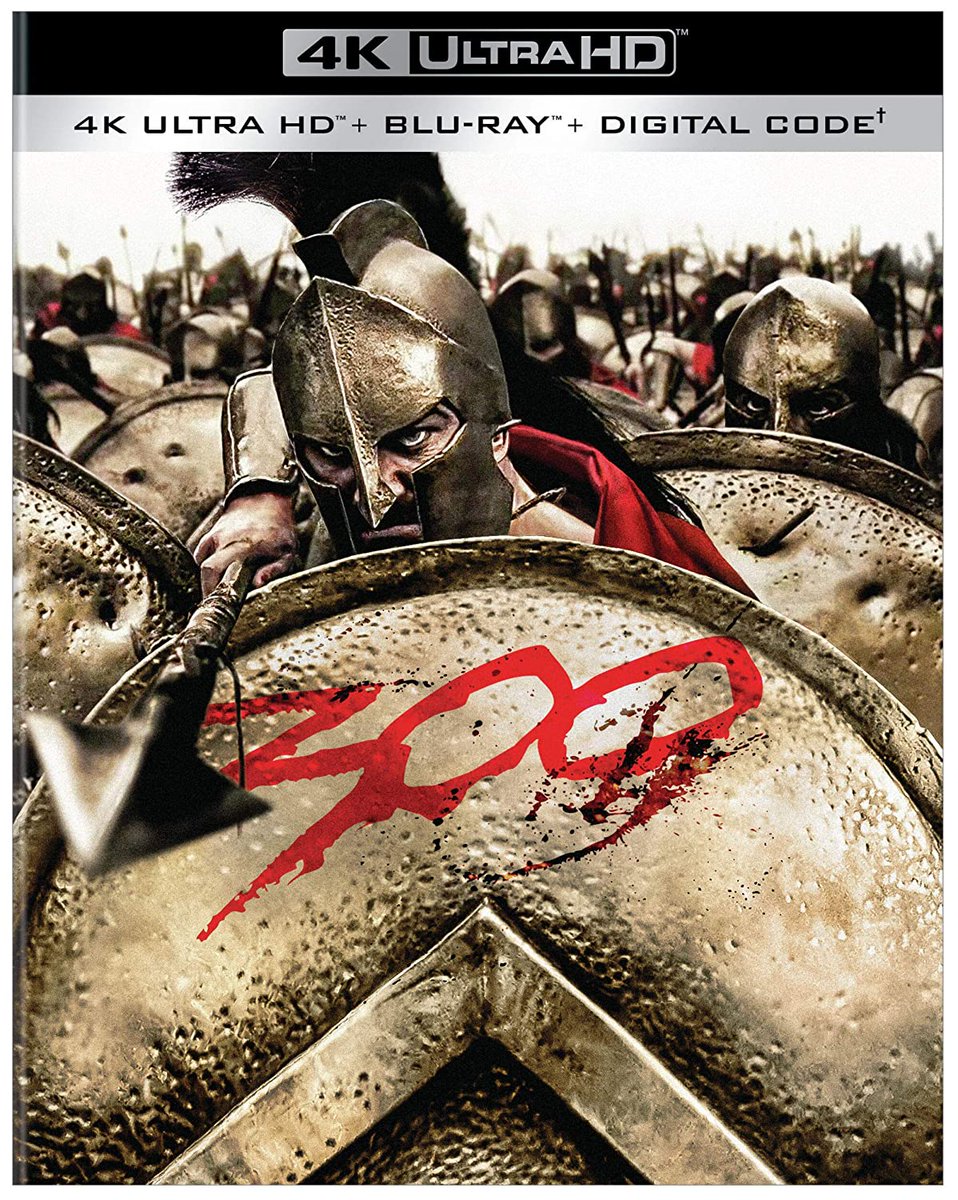 Now available for pre-order on Amazon: Mario Puzo's THE GODFATHER, CODA: THE DEATH OF MICHAEL CORLEONE on #Bluray & #DVD from @ParamountMovies. Street date 12/8. No #4K #UltraHD yet announced. Click here to order... amazon.com/exec/obidos/AS…