Harry Potter and the Prisoner of Azkaban (4K UHD Review) 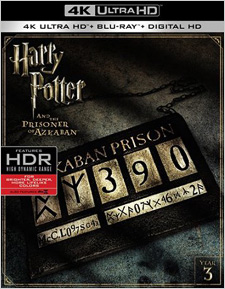 Despite having saved Hogwarts from Voldemort’s second attempt to return, Harry Potter must endure yet another summer with his family, the Dursleys, during which time he’s goaded into using magic by Vernon’s insufferable sister, Marjorie. After making a hasty escape, Harry is delivered by the Knight Bus to the Leaky Cauldron, where he learns that Sirius Black, the man who betrayed his parents, has escaped from Azkaban prison and may be trying to find him. To protect its students from Black, Hogwarts is placed under guard by the ominous Dementors of Azkaban, who seem unusually interested in Harry. But the news is not all bad, for Ron, Hermione, and Hagrid stand with Harry, as always, ready to deal with whatever dangers might come their way. New professors have come to Hogwarts too, ready to teach the students further magical skills and knowledge. But the most important lesson Harry must learn is this: Things are never exactly what they seem to be in the magical world… especially when it comes to Sirius Black.

For this third installment of the Harry Potter franchise, Alfonso Cuarón (Y Tu Mamá También, Children of Men, Gravity) takes over the director’s chair from Chris Columbus and delivers arguably the best entry of the series in the process. Azkaban retains all of the charm of the previous two films, but adds a more sophisticated story, as well as a darkly whimsical edge that is pure Cuarón and a perfect fit for the material. For the first time on screen, Harry’s world feels as dangerous as it is magical, and as imaginative as the books upon which it’s based. Tons of little touches make all the difference here – the choir singing “Something Wicked This Way Comes” at the start of the film, the bird that meets its demise in the Whomping Willow, the executioner sharpening his blade in the Hogwarts courtyard. The film’s cinematography and lighting have greater complexity here than in the previous films. Of course, it’s also important to acknowledge the introduction of Michael Gambon, who takes over ably here as Dumbledore for the late Richard Harris. Emma Thompson, David Thewlis, and Gary Oldman are all outstanding additions to the cast as well. And John Williams delivers his final, and perhaps best, orchestral score for the series in this outing.

Harry Potter and the Prisoner of Azkaban was shot on Super 35, as were the two films before it. Unlike them, however, it was finished as a 2K Digital Intermediate (with VFX rendered in 2K as well). For this Ultra HD release, that DI has been upsampled and given a new HDR10 color grade. The film is presented here in its proper 2.39:1 theatrical aspect ratio. Grain levels are more consistent throughout, with greatly improved black levels, and fair shadow detailing. Fine image detail and texturing is also more consistent now, though it’s not quite as abundant and refined as it is in the best scenes of the two previous films, which had native 4K scans. But the color palette in this film is far more subtle and nuanced than in previous installments, a bit more high contrast and naturalistic. It lacks the warm push (in its Hogwarts scenes) seen in the previous films, but it’s much more appealing, and the High Dynamic Range is notably improved over the first two films, with brilliant whites and bold highlights.

Primary audio on the 4K disc is a new English DTS:X object-based mix of near reference quality, with excellent clarity and firm LFE support. It’s a highly lively mix, with tremendous dynamic range apparent right from the start as Harry takes his ride in the Knight Bus. Naturally, there’s another impressive Quidditch sequence to get the height channels going, but anytime the Dementors appear the mix shifts to another gear as well. The mix is just as impressive in its quieter atmospheric effects and immersion, which help to create a subtly unique soundscape for virtually setting in the film, from different Hogwarts hallways and chambers, to various exterior open-air locations, to the dampened whisper of snowfall, and even confined spaces. Williams’ score sounds light and energetic. Additional audio options include English 2.0 Descriptive Audio, German 5.1 DTS-HD Master Audio, and 5.1 Dolby Digital in French, German, Italian, Castilian Spanish, Latin Spanish, Portuguese, and Catalan, with optional subtitles in English SDH, French, German for the Hearing Impaired, Italian for the Hearing Impaired, Castilian Spanish, Latin Spanish, and Portuguese.

Warner’s 4K Ultra HD release is a 3-disc set. It contains the film by itself in 4K on the UHD, plus a movie Blu-ray with the film in 1080p HD. This is the same disc that was released previously in the Ultimate Collector’s Edition Blu-ray set for this film. There’s also a second Blu-ray, all of extras and again the same bonus disc that was included in the UCE Blu-ray set, called Creating the World of Harry Potter Part 3 – Creatures. It offers the following features (some in HD and some in the original SD):

That’s everything created for the UCE edition box set, though obviously you don’t get the hardcover book or swag. Not here from the original Blu-ray release are the Creating the Vision interview, Introduction, Head to Shrunken Head, The Gryffindors, Professor Dumbledore and Rubeus Hagrid, The Slytherins, The Dursleys, The Heroes, Professor Lupin and Sirius Black, The Filmmakers, Choir Practice, Care of Magical Creatures, and Conjuring a Scene. And again, the original DVD release featured some interactive games, hidden features, and ROM content that’s not here. You do, however, get the Digital HD code on a paper insert in the packaging.

Harry Potter and the Prisoner of Azkaban is a chilly-but-fun cinematic gem and it’s never looked or sounded better than it does here. Warner’s Ultra HD release offers a bit less fine detail than the previous two films in 4K, but its improved consistency, its gains in color and contrast, and it’s outstanding object-based audio mix more than make up for it, all of which significantly improves upon the standard Blu-ray experience. Note that this title is also included in the Harry Potter 8-Film Collection 4K Ultra HD box set (available here on Amazon), but be aware that the Collection does NOT include the Creating the World of Harry Potter bonus Blu-rays – only the films on BD and 4K. Either way, don’t miss it.

Heads-up: The Daniel Craig #JamesBond films are coming as #4K #UltraHD single film SKU releases on 2/25. Still no word yet of the classic films, but it's possible we may see some of them on disc when No Time to Die is released later in 2020.