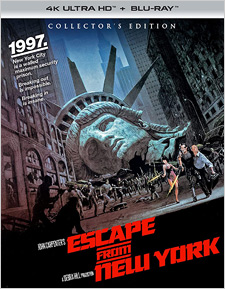 By 1981, John Carpenter was known as one of modern horror’s masters after Halloween and The Fog, but when Escape from New York premiered, he re-established himself as a filmmaker willing to tackle different genres, approaching them in his own unique way. This time around, however, his political leanings were more openly expressed than ever before, but within an action package of sorts. With comments on society, the police force, the military, and the government, it’s a wonder that Escape from New York was as big a hit as it was. Thankfully, the advertising sold the film for what it was, and not as a political commentary. But it’s there, and it’s unmistakable.

The story of Escape from New York hardly needs a refresher course. Even those who haven’t seen the film get the basic idea: an outlaw goes into a walled-off prison in a dystopian future and must get out alive. Pretty simple and straightforward, as the majority of John Carpenter’s films were in that era. The guiding beacon of the film is Kurt Russell, who had yet to achieve much success outside of a Disney project. His persona as a clean-cut youngster was thoroughly annihilated with Snake Plissken, a subversive, soft spoken, eye-patch wearing tough guy who’s adept at carving out his own survival. Truly, it’s what Escape from New York is really about. Many have accused the film to some degree of being slow and clunky, particularly when the advertisements and even word of mouth described it as an action yarn. In actuality, the action is a byproduct of Snake trying to survive. It’s right there in the title: Escape from New York, not Action in New York.

The film also contains one of John Carpenter’s finest scores to date, but this time around he brought on Alan Howarth to help facilitate it, someone whom he would go on to work with on a number of other projects. The opening and closing title theme is particularly excellent. Also on board was cinematographer extraordinaire Dean Cundey, who returned to work with Carpenter after Halloween and The Fog. The resulting film, along with The Road Warrior, would influence an entire subset of Italian rip-offs over the next several years, with zero budgets and wilder ideas thrown into the mix. But at its core, the simplicity of Escape from New York and the craft of the people who put it together is why it works, and continues to work long after computer animation and slicker, faster-paced action films have become the norm.

Escape from New York was shot by cinematographer Dean Cundey on 35 mm film using Panavision Panaflex Gold cameras and Panavision Super High Speed lenses, finished photochemically, and presented in the aspect ratio of 2.35:1. Scream Factory’s presentation is sourced from StudioCanal’s recent 4K restoration of the original camera negative, which was finished as a 4K Digital Intermediate, and graded for high dynamic range (HDR10 and Dolby Vision options are available). The results are mostly outstanding. Escape from New York has always been fiendishly difficult to present on home video because of how dark it is. Though it was shot with new types of high speed lenses, it didn’t necessarily translate well visually to VHS and LaserDisc. (It’s also had its ups and downs on DVD and Blu-ray.) But for its US debut on Ultra HD, black levels have almost perfectly been achieved with a very high bit rate to get the most out of them. The HDR, specifically the Dolby Vision option, really soaks up the finer details in the shadows, as well as the limited color palette. There are a couple of moments where certain scenes appear a tad too dark, specifically in the shot of the helicopter landing in Manhattan to retrieve the president (“President of what?”) and the shots of the police control room at the front of the film, but for the most part, they’re drenched in detail with fine to medium grain. Healthy flesh tones are on display, and the image is stable and clean. Some of the visual effects shots don’t hold up perfectly with the additional clarity, but the rest blend well enough. Minor caveats aside, it’s the best the film has ever looked on home video, and doubtful that it could look much better.

Audio options include English Dolby Atmos (7.1 Dolby TrueHD compatible), English 5.1 DTS-HD Master Audio, and newly-restored English 2.0 DTS-HD Master Audio. Optional subtitles are available in English SDH. The previous Scream Factory Blu-ray release featured a fold-down of the 5.1 as a stereo option, which has been rectified here, giving us the option of the original theatrical audio, in addition to the new Atmos track. The latter sounds like it was based on the stereo track, widening it out without adding anything unnecessary. There’s some nice overhead for passing helicopters and beefed-up low end for explosions. On all of the tracks, dialogue exchanges are clear and precise, even for Kurt Russell’s Eastwood-esque delivery. The score fills out the surrounds while sound effects have excellent push, particularly gunfire. Since this is also a quiet film for long stretches, atmosphere plays a big part, and none of these tracks disappoint in that department. As a purist, having the original stereo track is the way to go for me, but the Atmos track is a very fine option as well. And for completists, the 5.1 track is not a bad option either.

Escape from New York on 4K Ultra HD sits in a black amaray case alongside a Blu-ray of the film in 1080p and a second Blu-ray of extras. Everything is housed within a slipcover featuring the original US poster artwork, which the insert also features. Scream Factory also produced a limited edition option, which was exclusive to their web store and included deluxe packaging, a poster for the film, a set of enamel pins, and a 7-inch vinyl of two re-recorded tracks of the film’s score. On both releases, the disc-based content is the same, each containing the following:

The first audio commentary with Adrienne Barbeau and Dean Cundey, moderated by Sean Clark, originally appeared on Scream Factory’s Blu-ray release of the film in 2015. Though the film’s soundtrack is mixed in a bit too high on top of the always soft-spoken Mr. Cundey, it’s still a valuable track as the three have a lovely conversation about the film and reminisce about the making of it while watching it together. (Both Barbeau and Cundey admit to not having seen it in a while.) Clark occasionally asks them questions when things go quiet, but it’s an otherwise lively and informative chat. The second audio commentary with John Carpenter and Kurt Russell was originally recorded for one of the film’s LaserDisc releases in 1994. As per usual, it’s a treat to hear Carpenter and Russell talk about their work together. Carpenter is in the driver’s seat most of the time, explaining the construction of the film as it goes along, with Russell popping in and out with questions and additional comments. Needless to say, it’s essential listening. The third and final commentary with Debra Hill and Joe Alves was recorded in 2003 for the film’s DVD release. The track doesn’t begin until a couple of minutes into the film, and the two dip out for long periods of time, but it’s good to have the producer and production designer on record. Hill is the primary contributor, though Alves offers his thoughts as well, mostly when prompted.

The extras on the third disc are comprised of material from Scream Factory’s previous Blu-ray release and MGM’s Special Edition DVD release of the film. Big Challenges in Little Manhattan covers the visual effects of the film with Dennis and Robert Skotak; Scoring the Escape goes over the film’s music with composer Alan Howarth; On Set with John Carpenter speaks to still photographer Kim Gottlieb-Walker about the behind-the-scenes photos she took for the film; I Am Taylor interviews actor Joe Unger about the deleted opening sequence of the film that he appears in; and My Night on Set talks to filmmaker David DeCoteau about being present during filming. Also included is the original opening, which shows Snake and his partner (played by Joe Unger) failing to rob a bank prior to the events of the film, which was deleted when deemed unnecessary (featuring optional commentary by Carpenter and Russell). Return to Escape from New York is a 2003 DVD documentary featuring many of the same contributors taking a look back at the film. Lastly, there’s the film’s two teaser trailers and a pair of still galleries, comprising a collection of 187 stills of behind-the-scenes photos, posters, lobby cards, production photos, press materials, and even a table-top game tie-in.

This is a wealth of material, but there’s a few things missing. The 2018 StudioCanal 4K Ultra HD release includes the Snake Plissen: Man of Honour featurette, along with a poster, a set of art cards, a 48-page booklet, and most importantly, a CD soundtrack of the full original score. A couple of Australian and UK Blu-ray releases also include a 30-minute interview with John Carpenter, while the 2003 MGM Special Edition DVD release includes the full length theatrical trailer, The Making of John Carpenter's Snake Plissken Chronicles comic book gallery, and the Snake Bites trailer montage. You can also find TV spots for the film on Youtube. Most of these are minor omissions, but it’s a shame that the full soundtrack couldn’t be included somehow.