Over the years, material taken from E.C. Comics has been adapted into several other forms. Whether it be the original Tales from the Crypt film, the subsequent TV show, or the underappreciated Vault of Horror film, it’s always had a particular niche within different mediums to some degree. In 1982, it was crossbred with two other staples of popular horror: George A. Romero and Stephen King, resulting in Creepshow: a highly-stylized portmanteau the likes of which have never been fully equaled. It still stands today as one of the most popular and effective horror omnibuses of its time.

Consisting of five stories and a wraparound, Creepshow opens and closes with a young boy who is scolded by his father for reading horror comics. This leads us into the first tale, Father’s Day. In it, an upper-class family find themselves on the receiving end of some revenge from their undead father, who was murdered years before and comes back demanding his “cake.” Next in The Lonesome Death of Jordy Verrill, a backwoods yokel discovers a fallen meteor, which has a vegetative effect on him and everything around him. In Something to Tide You Over, a psychopathic man discovers that his wife has been unfaithful to him. He buries her and her lover up to their necks in sand on a private beach and lets the evening tide come in to take care of them, but are they really dead? In The Crate, a man learns of a deadly creature that lives under a staircase at a local university and sees it as an opportunity to rid himself of his belligerent and overbearing wife. And in They’re Creeping Up on You, an uncouth businessman with a fear of germs finds his hermetically-sealed apartment invaded by a gargantuan amount of cockroaches.

Along with the original Tales from the Crypt and Trick ’r Treat, I personally consider Creepshow to be one of the most thoroughly satisfying horror anthologies ever made. The problem with most of them is that there’s always room for improvement. One or more of the stories tend to be weak stacked up against the others, but in the case of Creepshow, every story is entertaining, at least for me. With beautiful splashes of color used to tint scenes during shocking moments, as well as camera tilts and the use border graphics, it’s basically a comic book come to life. Besides the talent behind the camera, which includes George Romero, Stephen King, cinematographer Michael Gornick, composer John Harrison, and producer Richard P. Rubenstein, you also have a stellar cast, which includes Tom Atkins, Carrie Nye, Ed Harris, Stephen King himself, Leslie Nielsen, Ted Danson, Gaylen Ross, Hal Halbrook, Adrienne Barbeau, Fritz Weaver, Robert Harper, and E.G. Marshall (as well uncredited appearances by Richard Gere and Ned Beatty).

It’s amazing to think that a major studio like Warner Bros. got behind a movie like Creepshow, but then again, with a creative combo like George Romero and Stephen King behind it, perhaps it’s not so surprising. Theatrically, it was the most lucrative horror film of the year for the studio, eking out a tidy profit, at least enough to warrant a sequel (through New World Pictures no less). It received its fair share of negative assessment at the time by critics who didn’t quite understand it, but today, Creepshow remains a genre classic.

Scream Factory’s deluxe Collector’s Edition release of Creepshow comes armed with a brand new “high definition transfer [that] was created in 4K resolution at Warner Bros. Motion Picture Imaging on the Lasergraphics Director scanner from the original camera negative.” Not only that, but the color correction was supervised and approved by cinematographer Michael Gornick. According to the accompanying video explaining some of the nuances of this new transfer, this is the first time since its theatrical release that Gornick has been given the opportunity to properly color time the film to how he and George intended. Without a doubt, it’s the finest presentation of Creepshow ever on home video – bar none, easily surpassing the previous Warner Bros. Blu-ray by a country mile. While the film is noted for having a lot of optical transitions, the increase in grain and softness is slightly less pronounced, making them a tiny bit more seamless. Otherwise, grain levels are thoroughly solid and even with amazing depth. The detail in the face of The Creep is more prominent than ever, the textures on the corpse of Nathan Grantham are clearer and sharper than before, and the multitude of roaches in Upson Pratt’s apartment are disgustingly well-defined. The other major selling point of this transfer is its color palette. With the assortment of bold primaries, including reds, blues, greens, and yellows, it’s always been a vibrant film. Michael Gornick has corrected the continuity of these colors from shot to shot during certain scenes, most notably in Something to Tide You Over, wherein green now dominates most of the story’s final moments. Skin tones are more pink and natural-looking, while whites are whiter and blacks are deeper with more shadow detail. Everything also appears much brighter with excellent contrast. The frame is entirely stable throughout and has been properly framed for the first time, meaning that there’s a slight loss of information along the sides. It’s also quite clean with little to no damage or debris leftover, other than some minor speckling, and no attempt has been made to digitally enhance it. The sequences that appear overtly soft, particularly during Jordy Verrill’s daydreams, are still highly diffused.

The audio for the film is a little more complicated. It comes in two options: English 5.1 and 2.0 DTS-HD with optional subtitles in English SDH. The stereo track, which is more representative of the film’s original release, is well-balanced with clear dialogue and good separation for the sound effects, score, and various music numbers. The 5.1 is where things get tricky. The track is most likely sourced from the Second Sight U.K. Blu-ray release of the film, which I don’t have to actually confirm this, but based upon the quality of it, I’m going to assume so. The sonic quality of it is fine, although it doesn’t offer much in the way of surround activity, but it’s most definitely higher in pitch than the original soundtrack. I personally don’t have a huge problem with this as I’m fine sticking with the stereo track, but others may find severe fault with it – your mileage may vary. To be honest, I didn’t even notice it until I toggled back and forth between the two tracks. To me, it’s not a deal-killer at all, especially considering the rest of the package.

Speaking of which, what this Blu-ray release has more than its predecessor is extras, courtesy of Red Shirt Pictures. Every release of the film up to this point has been handled by this company, so there’s some nice continuity to it all. While there are some things that haven’t been included for specific reasons, there’s still a great deal here to dig into, including new and old material. In the new department, there’s an audio commentary with composer John Harrison and construction coordinator Ed Fountain, moderated by Michael Felsher, which is a fairly lively back and forth about each man’s role on the film and their experiences working on it; another audio commentary with cinematographer Michael Gornick and filmmaker Lee Carr, who have a conversation about the film’s production; Terror and the Three Rivers, a 30-minute roundtable discussion on the making of Creepshow with Michael Felsher and actors/crewmen John Amplas, Tom Atkins, Tom Savini, and Marty Schiff, which is a fantastic off-the-cuff chat between the five men about their memories of working with George and how they got involved with the film; The Comic Book Look, a 13-minute interview with costume designer Barbara Anderson, who covers her career and production designer Cletus Anderson’s work on the film; Ripped from the Pages, a 16-minute interview with animator Rick Catizone, who covers his work on both the first and second films; The Colors of Creepshow, the aforementioned 10-minute interview with Michael Gornick about the film’s restoration; Into the Mix, a 13-minute interview with sound re-recordist Chris Jenkins, who goes over his work with George; Mondo Macabre, a 10-minute look at Mondo’s various Creepshow posters with Mondo co-founder Rob Jones and Mondo Gallery events planner Josh Curry; and Collecting Creepshow, a 13-minute look at some of the original props and collectibles from the film with collector Dave Burian.

The older extras carried over from the film’s various U.K. Blu-ray and DVD releases include an audio commentary with George Romero and Tom Savini, moderated by Michael Felsher, which is a fantastic and energetic listen; another audio commentary, which is made up of audio interviews with Michael Gornick, John Amplas, property master Bruce Alan Miller, and make-up effects assistant Darryl Ferrucci, all conducted by Michael Felsher (which was included on the aforementioned Second Sight Blu-ray release); 26 minutes of Tom Savini’s behind-the-scenes home movie footage; Horror’s Hallowed Grounds, a look at the original filming locations, hosted by Sean Clark and Tom Atkins; 12 minutes of deleted scenes; the U.S. and Spanish theatrical trailers for the film; a TV spot; 2 radio spots; five sets of still galleries: posters and lobby cards (79 in all), movie posters (26 in all), color stills (25 in all), special effects make-up (71 in all), and behind the scenes (76 in all); a 38-page insert booklet with liner notes about the film by Michael Gingold, as well photos, posters, and restoration details; and a sturdy slipcase to house it all in.

Many fans were hoping that the film’s full workprint would be included with this release, since it’s been circulating illegally for quite some time, but the deleted scenes cover most of the major stuff – what’s leftover are minor trims of shots to speed up the pace of the film. Also not included and only available through improper channels is even more of Tom Savini’s behind-the-scenes footage. I would have also appreciated having the film’s original mono soundtrack as well. And last but not least, the biggest piece of missing material is the Just Desserts: The Making of Creepshow feature-length documentary, which was released not too long ago by Synapse Films. That release included an audio commentary with Michael Felsher; another audio commentary featuring Michael Felsher interviewing John Amplas, Bruce Alan Miller, and Darryl Ferrucci (which was also sourced for the Second Sight audio commentary); Creepshow Days, an 8-minute interview with Michael Gornick; Tom Savini’s Behind the Screams, a variation of the same behind the scenes footage found on the new Blu-ray of the film; 24 minutes of extended interview segments with George Romero, Tom Savini, and artist Bernie Wrightson; an 8-minute vintage segment from a Halloween edition of Evening Magazine, which aired on KDKA-TV in Pittsburgh in 1982; and the hour-long Scream Greats Volume One: Tom Savini, Master of Horror Effects VHS documentary with optional audio commentary by Savini himself, moderated by Michael Felsher. The reason for this material’s non-inclusion is fairly obvious, that it belongs to another company, but perhaps it was felt that it was pointless to include when it’s already fully available.

So is this the definitive release of Creepshow on home video? Mostly, but the items that aren’t included make it feel slightly less so to a degree. That said, this is an amazing, Criterion-level, release of the film and nitpicking the tiny details seems, to me at least, to be a wasted effort when so much good has been achieved. Recommending this release is preposterous – you must own this! 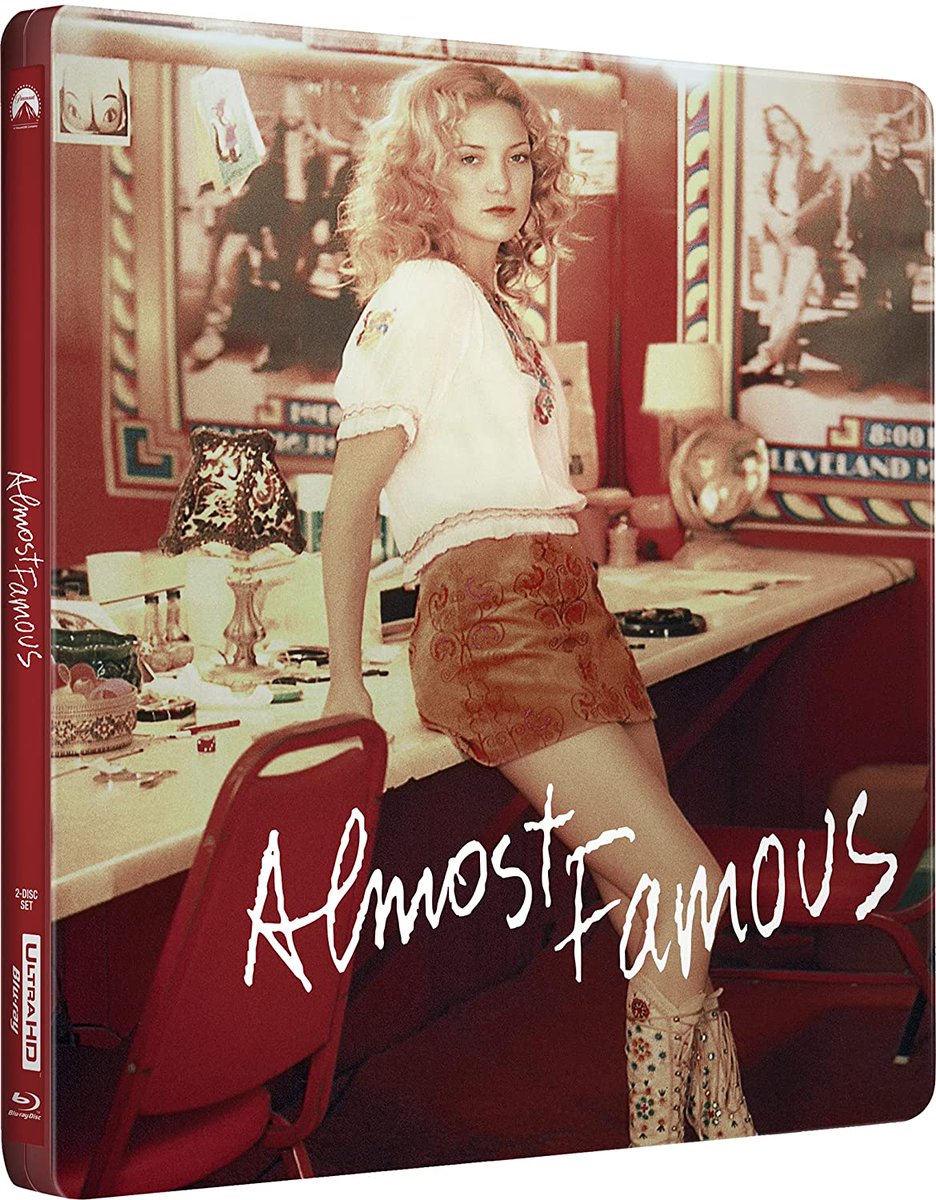 RT @BillHuntBits: This is worth checking out for #StarTrek fans—a look at differences in the new 4K TMP TE (iTunes version). Two things to…