Sony is prepping Elysium, Looper, and GATTACA for 4K, plus Giant from the Unknown (1958) & more 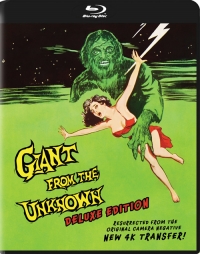 All right, first things first today: I’m pleased to report that we did not have to evacuate from these wildfires here in SoCal after all. But it was a long night while we waited to find that out. Thankfully, when I stepped out this morning, it appeared that the fires had moved farther away from us, not closer. And this afternoon the evacuation orders all around us were lifted. So... whew!

It’s going to take a couple days to get back to normal around here, but I count that as a good problem to have, considering the alternative.

Now then... the big news today is that our industry and retail sources are telling us that Sony Pictures Home Entertainment is quietly preparing to release Neill Blomkamp’s Elysium, Rian Johnson’s Looper, and Andrew Niccol’s GATTACA in 4K Ultra HD early in 2021. Elysium and Looper are already available digitally in 4K, and a few European retailers have listed GATTACA for physical 4K release in March. [Read on here...]

All three of those titles would be highly welcome on the format. I’ve personally been pushing for GATTACA for a while now. It’s an outstanding sci-fi film, with gorgeous cinematography by Sławomir Idziak, whose other work includes Krzysztof Kieslowski’a Three Colors: Blue and Ridley Scott’s Black Hawk Down.

We’re also continuing to hear tentative rumors that Warner Bros. Home Entertainment is planning to release Christopher Nolan’s TENET in December. If that’s the case, we would expect an official announcement sometime in the next couple of weeks.

Meanwhile, StudioCanal has announced a new 4K remaster of Ousmane Sembène’s Mandabi (1968), which was the full-length African language film from West Africa. StudioCanal intends to release the film on physical media (we believe including 4K UHD) in Europe in the spring of next year. A US Blu-ray and DVD release is apparently coming from the Criterion Collection in 2021.

Scream Factory and IFC Midnight have set The Rental for Blu-ray release on 12/1.

"Inspired by the film, the Limited-Edition Giant Cult Film Box Set features exclusive collectibles that will thrill any cult classic film fan, including a 13-month cult film calendar, bookmark, magnet, custom playing card deck and lapel pin inspired by Vargas the Giant himself. And that’s not all! Each box set will also include a surprise, TFD Vault cult film, recently restored from the original camera negative in stunning 4K and a one-year subscription to The Film Detective app, unlocking thousands of classic film and television titles available on iOS, Android, Roku, Apple TV and Amazon Fire TV. At an $120+ value, the Limited-Edition Giant Cult Film Box Set is the perfect holiday treat. And if this giant offer at giant savings wasn’t incentive enough, the first 100 Blu-ray box set orders will receive their copy of Giant from the Unknown in a special blood-red Blu-ray case."

Extras on the discs (all versions) will include audio commentary with author/historian Tom Weaver and guests, audio commentary with co-star Gary Crutcher, 2 featurettes (including You’re a B-Movie Star, Charlie Brown and The Man with a Badge: Bob Steele in the 1950s), the original trailer, and a Blu-ray collector’s booklet with still gallery and liner notes by Weaver. So there you go.

And that is all for today.

Back tomorrow with more. Stay tuned!

RT @BillHuntBits: Heads-up Bits readers: This is six minutes of MUST SEE viewing: Director Peter Jackson discusses the THE LORD OF THE RING…

RT @BillHuntBits: Bits #4K Review – My review of Peter Jackson’s THE HOBBIT TRILOGY in #UltraHD from @WBHomeEnt is also NOW COMPLETE. The s…

Today on The Bits – Our reviews of The Lord of the Rings & The Hobbit in #4K are up, plus upcoming #Bluray & #UltraHD title news, Cyber Monday sales & more thedigitalbits.com/columns/my-two…