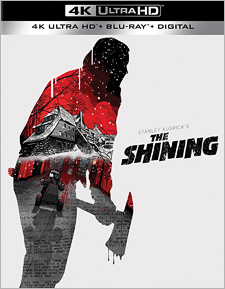 Jack and Wendy Torrance (Jack Nicholson and Shelley Duvall) are a couple from Vermont looking for a fresh start. Jack, a former schoolteacher, has a writing project he’d like to tackle and solitude is the best thing for it. Wendy is looking forward to an adventure and hopes a change of scenery will benefit their young son Danny (Danny Lloyd), who’s been suffering from episodes. With all this in mind, Jack takes a job as the winter caretaker of the remote Overlook Hotel in the Colorado Rockies. He’ll see to it that the hotel suffers no damage while it’s closed for the off-season from October to May. When the family arrives at the Overlook, they get the full tour and all seems well. The hotel cook, Dick Hallorann (Scatman Crothers), sets Wendy at ease and takes a special interest in Danny. But it turns out that Dick and Danny have a unique gift in common—a telepathic ability called “shining” that allows them to see and know things other people can’t. And both know that there’s something ominous about the Overlook. When the hotel staff finally departs, leaving Jack, Wendy, and Danny alone, everything seems fine at first. But gradually, each member of the family begins to have visions, to exhibit obsessive behaviors, and to lose touch with reality.

Right off the bat, you have to just let go of the fact that Kubrick’s The Shining is not a particularly faithful adaptation of the Stephen King novel upon which its based. Once you do, the film is still completely maddening… and that’s exactly as Kubrick intends it. One of the key reasons for this is that there are no reliable narrators. Typically, a horror film will follow a character (or group) that serves as a proxy for the audience, drawing viewers into the story. When the horror begins, it’s all the more terrible because you identify with the characters experiencing it. But that’s not the case here. Instead, we see multiple points of view—Jack, Wendy, Danny, Hallorann, even the Overlook itself—all of which are unreliable. There’s something slightly off or abnormal about each of them from the very start. As the film develops, and their mania begins to emerge, you have no idea which perspective is real or trustworthy… if any are at all.

This effect is enhanced by the cast’s performances, which are subtle and unsettling yet naturalistic. As a leading man, Jack is Jack, of course, and he’s never a dull boy. It’s well known that Kubrick kept Shelley Duvall on edge all through the filming and you can see that stress in her manner on screen. Young Danny Lloyd has a strangely calm presence—he’s unnaturally detached, if you will—and it’s very effective for the character. But Crothers is the most disarming here; he seems completely normal, friendly, and welcoming… until his character takes an odd turn. Kubrick’s The Shining is a perfect study in physical, emotional, and psychological isolation. It’s also visually remarkable, one of the first productions to use the Steadicam camera mount (which was new at the time) and certainly the first to really take advantage of what it could do (Garrett Brown, who invented the mount, was personally involved in this production—his commentary is included on the 4K). And the film’s soundtrack is very similar to Kubrick’s earlier 2001: A Space Odyssey in that it’s mostly classical and abstract pieces, which sets an uneasy tonal landscape for the imagery.

The Shining was shot on 35 mm film, using Arriflex cameras with Zeiss and Cooke spherical lenses, and was finished on film. It was exhibited at the 1.66 aspect ratio in Europe, but at 1.85 in the US and UK which was Kubrick’s intended ratio (based on his own handwritten notes, though this is a matter of some dispute with fans). For this release, the original camera negative was scanned in 4K by Warner Bros. Motion Picture Imaging and the color grading was done by Janet Wilson (in both SDR and HDR), with supervision by Kubrick’s longtime assistant Leon Vitali (based on his notes as to the director’s wishes). It’s presented on Ultra HD with HDR10, HDR10+, and Dolby Vision high dynamic range, though at the 1.78:1 aspect ratio (like the previous 2007 Blu-ray release—reviewed here—as this is how Vitali believes Kubrick would have wanted it). Aspect controversies aside, the result is gorgeous. This is absolutely a reference quality presentation for this film, with sublime fine detail and wonderfully nuanced texturing. Image grain is light and pleasing. Contrast is perfect, with dark detailed shadows and bold but not aggressive highlights. The HDR grade is pleasingly restrained, so the film still retains every bit of its familiar appearance. It’s much more natural looking now, with richer and more nuanced colors. The colors are, in fact, striking—they really draw you in. And the added resolution and wider gamut give the image a depth its never had before when viewing at home.

The audio on UHD is presented in the same lossless English 5.1 DTS-HD Master Audio mix that was found on the 2007 Blu-ray release, and that’s just fine. This isn’t a film that requires a lot of panning, movement, and sonic trickery. It’s all about the clarity and atmospherics, and the DTS-MA mix handles those aspects just fine. There is one disappointment here though, which is that the film’s original mono mix isn’t included. Warner’s 2001 4K release (reviewed here) did include that film’s original 6-track 70 mm theatrical audio, so it was reasonable to expect this release to include theatrical audio too, but such is not the case. Additional audio options do include French, German, Italian, Latin Spanish, and Polish Voice-Over in 5.1 Dolby Digital. Subtitles are available in English for the Deaf and Hard of Hearing, French, German for the Hearing Impaired, Italian for the Deaf, Dutch, Chinese, Korean, Spanish, Arabic, Czech, Danish, Finnish, Hungarian, Norwegian, and Polish.

Warner’s UHD disc itself includes only one extra:

The package does, however, include a Blu-ray version of the film that is mastered from the same new 4K restoration. It too offers the commentary along with:

It’s not a lot of material to be sure, but it does represent all of the previous home video extras and what you get is insightful and substantial. The commentary with Brown and Baxter offers a nice balance between technical discussion and thoughts on the story and Kubrick himself. Vivian Kubrick’s “making of” film is terrific and the piece with Carlos is interesting too. It’s just a shame there’s nothing new. It would have been nice to finally see the film’s original ending, for example. Still, Stanley Kubrick’s work speaks for itself and that’s exactly as those who manage his estate wish to keep it. You do at least get a Digital Copy code on a paper insert.

The Shining is a psychological horror film to be sure, but it’s one that defies easy reading—so much so that many interpretations have emerged over the years. (See Rodney Ascher’s Room 237 documentary if you doubt this.) It’s also quintessentially Kubrick—a purely cinematic experience—and one that grows in appreciation with each new viewing. People will likely debate and obsess over this film indefinitely and that’s perhaps the greatest testament to its brilliance. This new 4K remastering is not only highly recommended, it’s an essential release for any serious cinephile.