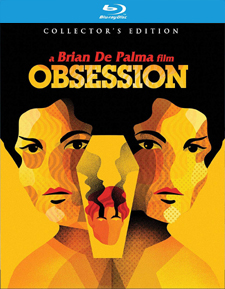 For the majority of his career, Brian De Palma has proven himself to be an Alfred Hitchcock acolyte, often borrowing (or stealing as some may call it) many of Hitchcock’s ideas and concepts for his own work. Never was this penchant for utilizing the undisputed Master of Suspense’s craft more prevalent than in 1976’s Obsession. Though a mild success, it was nothing compared to Brian De Palma’s next film, which arrived three months later: Carrie.

Real estate businessman Michael Courtland (Cliff Robertson) goes into business with his new partner Bob Lasalle (John Lithgow) in Louisiana. After a late evening party at his home, his wife Elizabeth (Geneviève Bujold) and his daughter are kidnapped for ransom. When a plan to try and retrieve them backfires and they are tragically killed in a car accident, Michael spends the next few years alone, continuing his business with Bob and dedicating a stretch of valuable land as a memorial park for his dead family. While vacationing in Rome, he revisits a church where he first met his wife and is startled to discover a woman named Sandra (also Bujold), who looks exactly like his Elizabeth. He gets to know her and becomes fixated with the idea of having a second chance with his long-dead wife, and is willing to do anything to make that happen.

Obsession was independently produced and subsequently purchased by Columbia Pictures, with only one major change to its content. Without spoiling it, the film would have had a much more controversial reception. Whether that change was a good thing or a bad thing is certainly up for debate, but it certainly would have driven the box office numbers up even higher as it likely would have been discussed much more by critics and the general public. Unfortunately, most could only discuss the film’s source upon its initial release.

On the surface, Brian De Palma and writer Paul Schrader (admittedly) took great inspiration from Hitchcock’s Vertigo. Nearly everyone saw it as a blatant ripoff, dismissing the strong performances from all involved, including Robertson, Bujold, and Lithgow, as well as the gorgeous cinematography by Vilmos Zsigmond and the amazing score by the late Bernard Herrmann. However, judging it upon its own merits, it’s an extremely well-mounted piece of work.

Scream Factory’s stateside Blu-ray debut of the film features a transfer that appears to be the same as Arrow Video’s Region B release. Obsession is a film loaded with diffusion in nearly every scene, meaning that no transfer is going to be super sharp or crisp. The presentation here is a naturally film-like one with nice grain reproduction and, despite the diffusion, strong detail. The color palette doesn’t offer an enormous amount of variety, but there are moments when a range of hues manage to poke through. Black levels are fine, though lightened up the grain, while contrast is ideal. It’s also stable and clean, leaving behind no noticeable damage.

The audio is presented in English 5.1 and 2.0 mono DTS-HD with optional subtitles in English SDH. Neither track really makes much of a difference as the 5.1 is mostly front heavy, meaning that nothing has been altered or boosted, retaining much of the original sound design. On both tracks, the dialogue is clear and precise, while sound effects sound a bit thin in places. The lush, organ-driven score definitely has the most impact. Everything is mixed together well, leaving no room for distortion, and there are no instances of hiss or crackle to be heard.

Obsession is an often overlooked film within Brian De Palma’s body of work, chiefly because it’s not been available for high definition consumption the way that many of his other films have been as of late. It’s a definite standout, and with a healthy presentation and entertaining and informative extras, Scream Factory’s Collector’s Edition Blu-ray comes highly recommended.