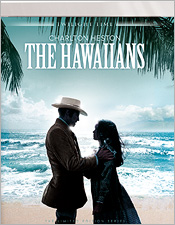 The good people at Twilight Time have followed up their fine Blu-ray of George Roy Hill’s Hawaii (1966) with an even better edition of its 1970 sequel, The Hawaiians. Both films are based on the same novel by James Michener, whose tome was so sprawling that it provided enough material for two movies with plenty left over. As Julie Kirgo informs us in the indispensable liner notes that accompany the Hawaiians Blu-ray, the book spans hundreds of years to provide a massive, comprehensive fictionalized history of Hawaii. The two films wisely choose particular sections to focus on; while the first deals with American missionaries in the early 1800s, The Hawaiians takes place two generations later and follows Whip Hoxworth, the grandson of Richard Harris’s character in the original film.

Hoxworth is an ambitious young man who returns from time at sea to find that his grandfather has failed to leave him the business interests he thought were his to inherit. Refusing to let this disappointment stand in his way, Hoxworth builds an empire based on a pineapple plantation and spends decades dealing with the complicated women in his life and the even more complicated relationships he forms with the Chinese and Japanese indentured servants brought to the island – and the complicated relationships they have with each other.

The crux of the film is Nyuk Tsin, a Chinese immigrant who is Hoxworth’s equal in intelligence and ambition, if not opportunity. The script by James R. Webb (How the West Was Won) splits audience identification between Tsin and Hoxworth to tell a sprawling but emotionally potent epic tale that encompasses multiple cultures and eras and brings the multiple strands together beautifully in a marvelously touching finale.

Like the first film, The Hawaiians is produced by the reliable Walter Mirisch, which means that all of this is mounted with first-rate resources and talent – the score is by Henry Mancini, the cinematography is by not one but two legends (Peckinpah regular Lucien Ballard and Point Blank’s Philip Lathrop, who finished the film), and the director is the criminally underrated Tom Gries, who had worked with Heston before on the masterful Western Will Penny. Gries and Webb deftly juggle characters and storylines in grand old Hollywood fashion, crafting a film that’s both complex and clear, intelligent yet accessible. It’s a must-see, whether you watch it in conjunction with Hawaii or as a stand-alone film.

There’s certainly no better way to watch it at home than via this Blu-ray release, which is beyond reproach in terms of both image and sound. The transfer preserves the broad tonal range of Ballard and Lathrop’s palette and contrast, particularly in the many nighttime exteriors, which have lost no detail or nuance here. The monaural DTS sound mix is surprisingly powerful, and in keeping with Twilight Time tradition Mancini’s score is available as an isolated track. There are no other extra features aside from an original theatrical trailer.

Heads-up: The Daniel Craig #JamesBond films are coming as #4K #UltraHD single film SKU releases on 2/25. Still no word yet of the classic films, but it's possible we may see some of them on disc when No Time to Die is released later in 2020.