Harry Potter and the Order of the Phoenix (4K UHD Review) 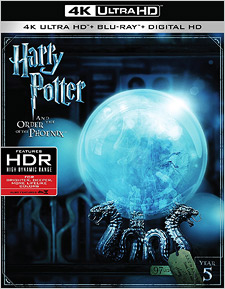 Having confirmed the return of Lord Voldemort, Harry Potter must now contend with the fact that much of the Wizarding World simply doesn’t believe him. In the wake of the death of Harry’s friend Cedric Diggory, during the Triwizard Tournament, the Ministry of Magic cracks down hard on Hogwarts and Dumbledore, determined to suppress the notion of Voldemort’s return even as his sinister forces begin to gather. But the champions of good aren’t sitting idle either. A secret organization known as The Order of the Phoenix has formed to fight the growing darkness and Harry’s newfound godfather, Sirius Black, is a member. Harry’s best friends at Hogwarts also begin to assemble a makeshift army, determined to protect themselves from the Dark Arts and to have Harry’s back.

David Yates takes the franchise’s helm here and delivers workmanlike direction. Order of the Phoenix doesn’t have quite the same whimsy as previous entries in the series, but it does have greater complexity, as we’re introduced to the larger political machinations at play in Harry’s world. It’s also more somber film, as it must be given that – starting with Cedric at the end of the previous film – the people close to Harry are becoming obvious targets for Voldemort’s wrath. But as these characters begin to face the reality that their world is headed toward war, they also mature and pull together, coming into their own as young adults is a satisfying way. Order of the Phoenix features a quite a number of changes and omissions from the J.K. Rowling book upon which it’s based (a whopping 870 pages long in the U.S. print version), but screenwriter Michael Goldenberg does a good job cutting through to the heart of the book, staying true to it, and retaining the essence of everything else. Daniel Radcliffe, Rupert Grint, and Emma Watson all give strong performances here and they’re bolstered by a terrific supporting cast, including Gary Oldman as Sirius. It’s a refreshing change of pace to see Oldman playing a good guy. The late Alan Rickman also shines in a more complex and interesting role in this film as Professor Snape.

Harry Potter and the Order of the Phoenix was shot on Super 35 film and mastered to a 2K Digital Intermediate, which means it’s been upsampled for this release and given a new HDR color grading pass. The film is presented in 4K (2160p) with a running time of 138:13 at the 2.39:1 theatrical aspect ratio. The first thing that’s noticeable here is that overall image detail and texturing are quite good, though the finest detail is just a hair lacking. But there’s also no visible magnification of grain texture resulting from the upsampling from 2K to 4K (as is apparent on many other Warner 2K-upsampled 4K titles), which suggest that a little bit of grain reduction was done prior to the upsampling. That isn’t a bad thing, though, as there’s still just enough grain leftover to retain a pleasing filmic quality. Moreover, the difference in resolution between the 1080p Blu-ray presentation and the 1556p DI does result in a small detail improvement that more than offsets the fine detail lost. Even more importantly, the High Dynamic Range is truly impressive here – it’s definitely the star of this presentation. At first, it might seem as if this is a more restrained use of HDR, but right away the brightest areas of the picture are notably brighter and the shadows are much deeper and more truly black. In between, the palette of available colors is significantly larger – not just richer hues but much more nuanced and natural ones than are visible on regular Blu-ray. And there are moments of showy HDR that truly dazzle, such as when Harry and his fellow wizards are flying via broom from Harry’s house to the secret headquarters of the Order of the Phoenix – you can see the bright lights on the Westminster Bridge, the HMS Belfast, and Parliament all glowing brightly white-gold and reflected in the deeply blue waters of the Thames. The golden filigree in the halls of the Ministry of Magic really pops. Potter and Dumbledore’s battle with Voldemort comes alive as well with flashing energy and sparks that your iris reacts to naturally, thus increasing your immersion in the film. This is an impressive video presentation and one that I believe Potter fans (that are also 4K enthusiasts) will find impressive.

Audio options on the 4K disc include English DTS:X (compatible with any multi-channel speaker arrangement you may be using – 5.1, 7.1, etc), along with English Descriptive Audio and French, Latin Spanish, and Portuguese 5.1 Dolby Digital (plus optional subtitles in those same languages but no more). The clarity and dynamic range is about the same as the regular Blu-ray’s DTS-HD audio, but the DTS:X mix feels a little more open and natural sounding, as well as a bit smoother and at the same time more precise. I wouldn’t say the difference is huge, but there’s no doubt that this is a fine surround sound mix.

Warner’s 4K Ultra HD release is a 3-disc set. It contains the film by itself in 4K on the UHD disc, plus a movie Blu-ray with the film in 1080p HD. This is the same disc that was released previously in the Ultimate Collector’s Edition Blu-ray set, and it includes the following extras in HD:

There’s also a second Blu-ray, all of extras and again the same bonus disc that was included in the previous Ultimate Collector’s Edition Blu-ray set, called Creating the World of Harry Potter: Part 5 – Evolution. Its extras, most in HD but a couple in the original SD, include:

These represent virtually everything that was created for the previous Blu-ray and DVD releases, with the exception of The Hidden Secrets of Harry Potter TV special that was available on the very first Blu-ray release of the film (so keep that if you wish). Obviously, this set doesn’t include the UCE edition’s hardcover book or swag either, but you do get a Digital HD copy code on a paper insert.

Harry Potter and the Order of the Phoenix marks a clear turning point for this series, starting the franchise’s slow but steady build-up to war in the Wizarding World. Warner’s new 4K release adds nothing new in terms of bonus features to the already terrific Ultimate Collector’s Edition Blu-ray release, but it does at least retain all of those extras. Moreover, its modest improvements in image resolution and sound quality, and its dramatic enhancement with HDR, make this the finest way to experience the film bar none. If you’re a fan of this series, you’ve entered the world of 4K already, and you can get this release for a good price… it’s worth the upgrade. Note that this title is also included in the Harry Potter 8-Film Collection 4K Ultra HD box set (available here on Amazon), but be aware that the Collection does NOT include the Creating the World of Harry Potter bonus Blu-rays – only the films on BD and 4K.

RT @BillHuntBits: Here’s Mars, a few minutes after it emerged from behind the Moon, as seen through my telescope tonight in SoCal. The sky…