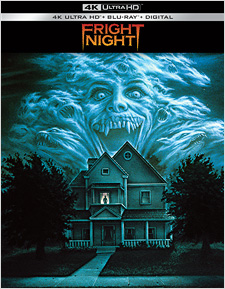 Outlasting many of its peers in popularity over the years thanks to home video and repeated cable viewings, Fright Night was the directorial debut of Tom Holland, who had previously written Psycho II, The Beast Within, and Class of 1984, and who would also go on to direct Child’s Play. Shot on a low budget and outgrossing it nearly three times over, the simple premise of a teenage boy who discovers that his next door neighbor is a vampire and enlists a down-on-his-luck former horror movie actor to help him was a surprise hit with audiences and horror fans alike when it was originally released in 1985.

While it would be easy to site the cult appeal of Fright Night as to why it’s stuck around all these years, you could also say that it’s also aged well because of how seriously it treats its horror elements. It’s not a straight up parody, nor does it go for blatant laughs instead of chills. It manages to have fun with the genre without making fun of it, which ultimately lends to its longevity. It also takes its time telling its story, never rushing through it but allowing for key moments to play perhaps less efficiently, but more effectively. Both Fright Night and The Lost Boys also re-popularized the idea that a vampire can only come into a house if invited, that crucifixes only protect their possessor if they truly believe in them, and that a vampire’s appetite isn’t strictly relegated to blood.

Although it was remade and released in 2011, it couldn’t hold a candle to quality of the original. With wonderful performances from the entire cast including, but especially, Chris Sarandon and Roddy McDowall, Fright Night stands as not just one of the best of its era, but one of the most enjoyable vampire films ever made. It helped to set the standard for a section of the genre that, during its heyday, was in need of a boost due to the overwhelming glut of slashers.

Fright Night was shot by director of photography Jan Kiesser on 35 mm film with Panavision Panaflex cameras and lenses, finished photochemically, and presented in the aspect ratio of 2.39:1. Sony Pictures brings the film to 4K Ultra HD for the first time with a new 4K scan of the original camera negative, graded for high dynamic range (HDR10 and Dolby Vision options are included). It’s an outstanding presentation, organic to its source with high levels of detail and a thoroughly refined grain structure. Shadows are thick with detail, and black levels are inky deep with perfect contrast. Even the special effects blend beautifully. The new HDR color grades reveal a broader spectrum of detail in the palette, deepening many hues and textures and allowing the finer nuances of costumes and background objects to come through. The Dolby Vision grade is particularly muscular, advancing the color palette and picture quality even further. The image is also stable and clean throughout with a healthy encode. It’s virtually perfect.

Audio is included in English Dolby Atmos (Dolby 7.1 TrueHD compatible). Also included is the previous 5.1 track and the original Dolby Stereo 2.0 theatrical audio (a matrixed four channel mix), both DTS-HD Master Audio tracks. The Dolby Atmos track mostly expands the original audio, discretely using the overhead speakers from time to time, but mostly allowing for sound effects and score to spread out naturally in the surrounding speakers. A mild bit of hiss is present, which is a little more obvious during quieter passages, but it’s never intrusive. The biggest hang-up for fans is going to be a minor alteration during the club scene in which Dandrige seduces and dances with Amy. Beginning at the 61:50 mark, the lyrics for the song Good Man in a Bad Time by Ian Hunter are completely absent, most likely mixed out of the track accidentally. Thankfully, the previous surround and newly-restored stereo tracks are fully intact, though the majority of the new Atmos track is quite excellent, if a bit imperfect. Additional audio options include French and German 5.1 DTS-HD Master Audio; Italian and Korean 5.1 Dolby Digital; and Czech, Portuguese, and Spanish 2.0 mono Dolby Digital. Subtitle options include English, English SDH, Arabic, Bulgarian, Chinese (Traditional), Czech, Danish, Dutch, Finnish, French, German, Greek, Hebrew, Hungarian, Icelandic, Italian, Korean, Norwegian, Polish, Portuguese (Brazilian), Portuguese, Spanish (Castilian), Spanish (Latin American), Swedish, Thai, and Turkish.

Fright Night on 4K Ultra HD sits in Steelbook packaging alongside a Blu-ray of the film in 1080p (sourced from the same new scan) and a second Blu-ray of bonus materials. Audio options on the second Blu-ray include English 5.1 and 2.0 DTS-HD Master Audio, as well as subtitles in English and English SDH, among many other language options for both. Tucked inside is a Digital Code on a paper insert. The Steelbook also features the original theatrical artwork on the cover. The following extras are included on each disc:

Provided are two audio commentaries: one with writer/director Tom Holland, actors Chris Sarandon and Jonathan Stark, and moderator Tim Sullivan; and the other with Tom Holland, actors William Ragsdale and Stephen Geoffreys, special effects artist Randall William Cook, and moderators journalist Jeremy Smith and Tim Sullivan. Both are quite entertaining and informative, though the edge must be given to the first track due to Chris Sarandon’s involvement. The Deleted Scene Storyboards feature an introduction by Tom Holland, who showcases storyboards that he drew personally for the film, but for a scene that was never shot due to productions costs. Next is the 2016 feature-length documentary by Dead Mouse Productions, You’re So Cool, Brewster! The Story of Fright Night, which features interviews with nearly all of the main cast and crew. It’s not the entire documentary since the original version was an hour longer and discussed the sequel in greater detail, but it’s still a quite a hearty meal on its own. What Is Fright Night and Tom Holland: Writing Horror were included as extras with the original DVD release of You’re So Cool, Brewster!, and they’re additional featurettes sourced from the same interview footage. The Holland/Beyda Spec Trailer is a never-before-seen alternate trailer put together by editor Kent Beyda and Tom Holland, the latter of whom introduces it and informs us that it was assembled in fear of Columbia Pictures not advertising the film properly. Last is a pair of green and red band trailers for the film.

The Fright Night Virtual Reunion begins with Tom Holland taking us on a tour of props from the film, then continues with a Skype/Zoom reunion of the original cast and guests performing a script read, which was performed in 2020. Participants include Tom Holland, Ben McKenzie, Chris Hendrie, Rosario Dawson, Mark Hamill, Amanda Bearse, William Ragsdale, Dorothy Fielding, Stephen Geoffreys, Chris Sarandon, Art Evans, Jonathan Stark, and Jason Patric. The Queer Lens is another Skype/Zoom affair, this time featuring writer and producer Bryan Fuller speaking to Amanda Bearse about the film’s gay appeal. A Novel Approach, again via Skype/Zoom, speaks to Tom Holland, authors John Skipp and Craig Spector, and publisher Mark Alan Miller, who all discuss the film’s novelization tie-in. From Apes to Bats, Tom Holland Amanda Bearse Talk Fright Night, and Round Table are all companions to the You’re So Cool, Brewster! documentary, and feature additional stories and more emphasis on those previously told. The Reunion Panel from 2008 covers both the original film and the sequel, featuring Tom Holland, Chris Sarandon, William Ragsdale, Jonathan Stark, Amanda Bearse, Stephen Geoffreys, Julie Carmen, and Tommy Lee Wallace, moderated by Rob Galluzzo. The Weekend of Hell panel took place in 2015 in Germany and features Amanda Bearse and Stephen Geoffreys. Next is an extended set of vintage materials that includes the film’s electronic press kit; the English and Spanish music videos for the J. Geils Band song Fright Night; the making of the music video; the featurettes A Vampire for the 80s (with and without an introduction by Roddy McDowall), Tom Holland: From Soap Operas to Screenplays to Screams, Chris Sarandon: A Different Kind of Vampire, Roddy McDowall: A Child Star Who Made It, Youthful Stars of Fright Night, and From Ghostbusters to Fright Night: A Conversation with Special Effects Coordinator Richard Edlund (long and short versions); additional open-ended interviews with Tom Holland, Chris Sarandon, William Ragsdale, Amanda Bearse, and Roddy McDowall; and seven clips from the film. Last are four sets of SFX Storyboard Comparisons and three photo galleries.

Since Fright Night has been released several times on optical disc, it’s had a number of differing extras packages over the years, though this release is the most jam-packed of them all. Still, a few things have fallen by the wayside. The Eureka Entertainment Blu-ray contained an exclusive Stills and Memorabilia gallery, while the Limited Edition Steelbook release included an an insert booklet featuring an essay by Craig Ian Mann. Also not included from the Twilight Time 30th Anniversary Edition Blu-ray release is an isolated score audio track and an 8-page insert booklet with liner notes by Julie Kirgo. Outside of including TV and radio spots and additional production and promotional still galleries, everything is accounted for.

While few horror films could ever be considered perfect, Fright Night comes pretty close. Even though it was released in the 1980s, it doesn’t thoroughly reek of the era. Even the fashions and hairstyles on display don’t scream the decade that they’re a part of, unlike many other horror films of the time. One can’t overlook the top notch effects as well, courtesy of Richard Edlund and his crew, who were fresh off of Ghostbusters at the time. And Sony’s 4K Ultra HD upgrade kills it in nearly every way, although purists won’t be happy with the change in the Atmos track. Otherwise, this a must-own release.