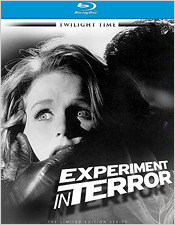 Though justly renowned for his deliciously funny farces, director Blake Edwards was hardly afraid to mine the depths of darkness.  Nicknamed “Blackie” for his bleak moods, Edwards could deliver unflinching drama (Days of Wine and Roses) with the same conviction as bright comedy (The Pink Panther).  Sometimes, he even combined the two (S.O.B.).  One of his most atypical films, however, still remains among his best.  1962’s Experiment in Terror was released the same year as Days of Wine and Roses, and in addition to Edwards, both starred Lee Remick and featured scores by Henry Mancini.  Terror was quite different from Days, and indeed, from any of Edwards’ other films.  This elegantly constructed, edge-of-your-seat thriller has lost none of its ominous appeal in the ensuing years, and the Columbia picture has just recently received a limited edition Blu-ray debut from Twilight Time.  It’s the second Edwards/Mancini movie on the Twilight Time label, following 1960’s Bing Crosby college comedy High Time.

The film’s premise is set up within its stunning first minutes: Beautiful bank teller Kelly Sherwood (Lee Remick) is attacked by a wheezing, asthmatic villain (Ross Martin, shrouded in shadows) who threatens both her life and that of her younger sister Toby (Stefanie Powers) if she doesn’t steal $100,000.00 from the San Francisco bank in which she works and deliver the sum to him.  Set in the Twin Peaks district of the city by the bay (yes, David Lynch apparently drew inspiration from Experiment in Terror!) and around the region, deep blacks dot the gorgeously-shot cityscapes.  The contrasts are rendered exquisitely in Twilight Time’s new transfer.  Edwards works in close harmony with his frequent collaborator Mancini throughout the film, making it an ideal candidate for the Twilight Time series.  Twilight Time’s raison d’etre is the presentation of a film plus an isolated track of its score, and the Mancini score has never been presented on LP or CD in its original recording.  (The composer preferred to create pop-oriented soundtrack albums by re-recording a film’s central themes, often with the original musicians but just as often with a very different style and feel.)

Revisiting Experiment, it’s hard to ignore how masterfully Edwards stages the silences, allowing for “jump scares” but hardly in the exploitative manner of many of today’s filmmakers.  There’s genuine dread in the film’s opening minutes that doesn’t let up for most of the two-hour-plus running time, culminating in a lavish set piece at Candlestick Park.  Mancini’s score, with Edwards every step of the way, is melodic and jazzy in the composer’s fashion, but never loses its ominous undercurrent.  The screenplay by Gordon and Mildred Gordon (who authored the original novel on which the movie was based) is straightforward but filled with snappy noir-esque exchanges: “This is a dead end street.”  “I know what kind of a street this is.”

The tension is ratcheted up as the film progresses from the initial confrontation between Kelly and her tormentor, but Edwards and the Gordons never resort to the conventions of melodrama.  Instead, the emphasis is on anxiety, both for Kelly and the viewer.  Remick is intelligent and subtle in the film, equally compelling as in her Academy Award-nominated role as an alcoholic in Days of Wine and Roses.  Even a friendly face is suspicious in Edwards’ murky world.  It may be shot in black and white, but nothing in Experiment truly is.  As Martin’s “phantom asthmatic” Red Lynch trails Kelly, all the while eluding square-jawed FBI Agent Ripley (Glenn Ford), his voyeuristic behavior grows more and more unsettling.  The film is frank in its sexual tension, too, particularly when Kelly is pursued by a man who believes her to be a prostitute, or when Martin dons drag in one frightening encounter with his intended victim.  It’s at its most explicit, by 1962 standards, when the supremely sinister Lynch orders one female captive to take her clothes off after he’s tracked and abducted her.

A high-point from master visual stylist Edwards is a sequence with Patricia Huston’s Nancy.  The potential witness has a “fairly unusual occupation” – that of a creator of mannequins – and Edwards makes full use of the creepy imagery of her apartment as Red resolves to see that she’s not a stumbling block in his path.  These high-concept sequences are remarkably cohesive even alongside the standard-issue procedural elements employed by Edwards, no stranger to police drama thanks to his television series Peter Gunn.  As the film follows Kelly’s attempts to avoid victimization, it gives time, too, to Agent Ripley’s exhaustive investigation into the enigma of Red Lynch and the cat-and-mouse game that results.  The director had worked with Ross Martin on both Peter Gunn and Mr. Lucky, and would work with him again on The Great Race.  The portrayal of the villain as scarred, both emotionally and physically, was of course nothing new in 1962.  But Martin imbues the character with an odd dignity that makes him all the more chilling.  His presence is omnipresent even when he physically isn’t, lurking around in the shadows.  He isn’t revealed fully until the film is more than half over.

The location shooting keeps Experiment grounded in reality, with San Francisco’s vistas a major part of the storytelling.  When the movie was shot, Candlestick Park was the new home of the San Francisco Giants; today, it’s slated for demolition.  But much of the city is still recognizable including a scene at Fisherman’s Wharf.  The 1080p Blu-ray transfer in the original 1:85:1 aspect ratio is an impressive one, especially in regard to cinematographer Philip Lathrop’s detailed, and significant, use of black-and-white.  One can’t imagine that Edwards would have shot the film in the same way had it been captured in color.

Though there have been exceptions such as Lost Horizon and Our Man Flint, Experiment hews to Twilight Time’s standard format of presenting the isolated score track as the only major special feature.  (There are also a few TV spots and trailers.)  This is quite a major bonus, however.  Mancini’s score is one of his most stunning.  The title theme, though written in 32-bar song structure, is distinctive largely thanks to its creepy use of the autoharp.  Other cues are breezy (“Fluter’s Ball”) or swinging (an arrangement of “When the Saints Go Marching In”) and still others emphasize startling minimalism.  The isolated track allows the viewer to savor all of these themes, including source music that even draws on rock-and-roll.  Mancini’s light comedic work often overshadowed his dramatic film scoring, and Experiment in Terror is just one score that reveals the rare, tremendous skill of the acclaimed composer for matching on-screen action with music that enhances and even adds to the story.  The film audio is presented in DTS-HD MA 5.1, though the film was originally believed to have been released in mono.  The isolated score is heard in 2.0 stereo.  English SDH subtitles have been included, and Julie Kirgo supplies a typically entertaining essay in the well-designed booklet which accompanies the release.

Blake Edwards and Henry Mancini continued their collaboration into the 1990s.  If Experiment in Terror might not be as well-known as their other films together such as The Pink Panther or Victor/Victoria, it’s certainly a minor classic of suspense that showcases both artists at their near-best.  As such, it deserves another look on Twilight Time’s new Blu-ray.

Today on The Bits – Bob Chapek is the new Disney CEO, plus Criterion 50% off Flash Sale, Gamera on #Bluray from Arrow & more thedigitalbits.com/columns/my-two…