Edge of the Axe (Blu-ray Review) 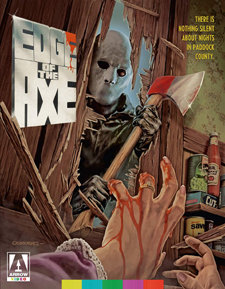 Stuck in VHS obscurity for over 20 years, Edge of the Axe (aka Al Filo del Hacha) is a Spanish horror film from the director of The House That Vanished, Vampyres (aka Daughters of Dracula), Whirpool, and Deadly Manor. The film was released theatrically overseas, but debuted on home video in the US in 1989. It was immediately lumped in with the glut of slasher films of the 1980s and only the most hardcore of genre fans even know of its existence.

In the film, a mask-wearing maniac wielding the titular murder weapon of choice is tearing through a small “American” town attacking random victims, chopping them to pieces with little to no motive. Meanwhile, two young men, one of whom is married to a much older woman, are looking to score with a couple of young women. One of them, Gerald, falls for the pretty but shy Lillian, a college student with a shady past. Gerald, a geek at heart, introduces her to computers, even going to the trouble of setting one up in her house. The more they get to know each other, Lillian begins to get the sneaking suspicion that something may be up with Gerald, particularly when she sends messages to his computer and he never responds. Is he the axe-wielding killer that seems to be eluding their local ineffective sheriff, or is he just a victim of circumstance?

Truth be told, Edge of the Axe is not one of the finest hours in slasher history. It has a weird vibe to it that doesn’t quite reach the levels of genre movies that feel like they were made by aliens (Troll 2, The Giant Spider Invasion), but it doesn’t exactly translate that well because of its Spanish/North American hybridism. Watching the film in English makes it seem like a generic American slasher, and watching it in Spanish makes it feel more like a giallo. It’s an all around odd affair, which is what makes it entertaining in spite of itself. It functions just enough to be building towards something, but the twist of who the killer is at the end doesn’t make a lick of sense. Add to that a myriad of poor dialogue, strange performances, and bloody murder sequences and Edge of that Axe makes for a fun movie night with a group of like-minded friends.

Arrow Video brings Edge of the Axe to Blu-ray sporting a new 2K restoration from the original camera negative. Included are both the English and Spanish versions of the film, which are identical outside of their spoken languages. It’s a solid and organic presentation with excellent grain management and high levels of fine detail. The color palette really pops, particularly during the opening car wash murder sequence, sporting bold blues and reds, as well as other scenes involving foliage, local buildings, and clothing. Blacks are deep with terrific shadow detail and everything appears bright and clear with good contrast. The image appears stable and clean outside of an occasional line running through the frame, which almost never occurs.

The audio is included in both English and Spanish mono LPCM. The English track is very evenly-keeled, meaning that nothing really stands out about it. The various elements are clear and audible, though the dialogue is a tad too quiet at times, but sound effects and score don’t offer much of a punch. The Spanish track definitely has better dialogue reproduction in terms of volume, thanks in no small part to the use of overdubbing. The overall presentation has a tad bit of crackle to it in places, and the sound effects and score are just as effective as the English track, which is not that much at all. Subtitle options include English SDH for the English track and English for the Spanish track.

The following extras are also included:

The audio commentary with Barton Faulks and Matt Rosenblatt is upbeat and informative as the actor reminisces with his former student about the film as they watch it together. The Hysteria Continues, made up of Justin Kerswell, Joseph Henson, Eric Threfall, and Nathan Johnson, enjoy a lighthearted discussion of the film’s content while contextualizing the timeframe in which it was made. In his interview, Barton Faulks talks about how much he enjoyed the film, how no animals harmed during the making of it, that he enjoys teaching, and that he was also up for the lead role in The Fly II that eventually went to Eric Stoltz instead. In his interview, Page Moseley talks about how he worked on the soap opera Santa Barbara working opposite Robin Wright, playing golf in Spain, and lying to the cast and crew about being able to do stunts and drive boats. In his interview, Colin Arthur, who mentions working on Conan the Barbarian, doesn’t recall any problems on the shoot but speaks about the film’s effects, particularly the fake axes that he made for it. The image gallery contains 21 images of behind-the-scenes photos, home video covers, posters, and lobby cards. Also included is a 24-page insert booklet with cast and crew information, the essay American Horrors by Way of Spain: International Co-Productions and the Spanish Slasher by Amanda Reyes, and restoration information.

Tried and true horror fans seeking out the undiscovered are bound to find plenty to appreciate with Edge of the Axe. Arrow Video’s treatment gives the film a new life with an excellent transfer and entertaining extras, all of which make for a very nice package.

RT @BillHuntBits: Here’s Mars, a few minutes after it emerged from behind the Moon, as seen through my telescope tonight in SoCal. The sky…