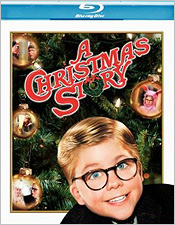 For whatever reason, I am blessed (or cursed) with near total recall of the first time I saw almost every movie I’ve ever seen. King Kong: my mom brought me to her film history class. The Road Warrior: first VHS tape I ever rented, along with one of those top-loading VCRs that were the approximate size and shape of a dog kennel. Inside Llewyn Davis: last weekend at Arclight Hollywood (highly recommended too, by the way). But I have no idea when I first saw A Christmas Story and that’s probably as it should be. Thanks to its near constant presence on television during the holiday season, the movie has become so ingrained in our collective consciousness that it’s almost impossible to imagine the holidays without it.

As is so often the case with movies that just “are”, it had been a number of years since I actually sat down and paid attention to A Christmas Story. At this point, it’s almost just like visual wallpaper for the holidays. The episodic, meandering nature of the film makes it ideal for 24-hour TV marathons where viewers can tune in and out as they please.

Revisiting it again in its entirety, I was struck by how the first 15 minutes or so are really kind of tedious. After that point, you will either have tuned out entirely or begun to be won over by the movie’s mix of nostalgia and cynicism. Sure, you may not have wanted a genuine Red Ryder air rifle when you were a kid but everyone can relate to that one Christmas when there was one present you wanted more than anything else in the world.

A Christmas Story captures that and a lot more about growing up, particularly if you grew up in snowy climes like the Midwest. Peter Billingsley gives a fine, natural performance as Ralphie, creating an instantly identifiable all-American boy. But the movie’s secret weapon is probably Darren McGavin as The Old Man, easily McGavin’s second greatest role (obviously Kolchak will always be number one). McGavin is funny, warm, distant and always believable as the dad who enjoys the holiday a lot more than he lets on.

When a movie is readily available for free on TV whenever you want to watch it, studios need to bring their A-game in order to entice folks to shell out the dough to buy it on disc. Warner hasn’t quite done that with A Christmas Story on Blu-ray, although it isn’t entirely a miss. The movie looks like a relatively low-budget picture from 1983, although certain details do pop out. The Christmas lights glow with warm reds and greens and when Ralphie looks out the window on Christmas morning to a frost-covered wonderland, the picture glistens. The audio is just fine (presented in its original Dolby Digital 1.0 mono format – not TrueHD), but there isn’t much here to give the system a workout.

As for extras, Billingsley and the late Bob Clark contribute a reasonably interesting and informative audio commentary. There are a number of featurettes, including Another Christmas Story (a making-of with some OK stories but too many moments devoted to the cast recalling their own real-life holiday memories, to which I say, “Who cares?”), Get a Leg Up (a too-goofy look at the cottage industry of leg lamps), and a brief history of the Daisy Red Ryder rifle, which is kind of interesting. You also get the trailer and script pages from some deleted scenes (I assume the footage no longer exists or we’d get that instead). Unfortunately, the readings by author Jean Shepherd that appeared on the 20th Anniversary Special Edition DVD are MIA on the Blu-ray, which is rather mystifying. And while the casual fan can pick up the disc on its own (as I did), you can also grab a fantabulous Blu-ray tin with Leg Lamp lights and a DVD tin with cookie cutters, an apron and all sorts of other miscellaneous holiday tchotchkes to clutter your box of holiday crap.

A Christmas Story is in many ways the ideal modern holiday movie, a seamless blend of Norman Rockwell nostalgia and National Lampoon’s Christmas Vacation attitude. Somehow, the combination produces a blend that almost everyone can identify with on some level. I wouldn’t necessarily put the latest Blu-ray edition at the top of your wish list but if it winds up under your tree, at least you won’t shoot your eye out with it.

@DrAdamJahnke's Disney-Plus-Or-Minus continues with the 1976 #Disney film TREASURE OF MATECUMBE. (Be sure to subscribe to his #Substack for future and past entries!) adamjahnke.substack.com/p/disney-plus-…