The BFG in December, plus The A-Team on Blu in Region B, Criterion Amazon sale & Longmire: S5 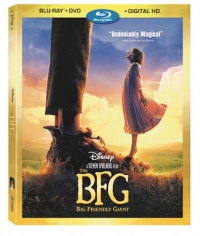 All right, we’re closing out the week with one last new title announcement: Disney and Amblin Entertainment have set Steven Spielberg’s The BFG for Blu-ray, DVD, Digital HD, Disney Movies Anywhere, and On-Demand release on 12/6. Extras on the Blu-ray will include 5 featurettes (Bringing “The BFG” to Life, The Big Friendly Giant and Me, Gobblefunk: The Wonderful Words of The BFG, Giants 101, and Melissa Mathison: A Tribute). Sadly, the best featurette is a digital exclusive, which I hate and you hate, but apparently nobody at Disney cares we hate… John Williams: Scoring a Dream. Anyway, audio on the Blu-ray will be English 7.1 DTS-HD MA. You can see the cover artwork to the left there.  [Read on here…]

Also today, here’s something interesting: It seems that a company called Fabulous Films Limited is releasing Universal’s The A-Team: The Complete Series as a 22-disc Blu-ray set in the U.K. on 10/17 (SRP £149.99). Unfortunately, though, it appears that the set is going to be Region B locked. It remains to be seen if the set will be licensed for release here in the States. Here’s a look at the U.K. cover artwork and a link to Amazon.co.uk. Thanks to Bits reader Rick C. for the heads-up...

Finally today, Amazon has just kicked off a big sale on Criterion Collection Blu-ray and DVD titles. We’re not sure how long it will last, so be sure to click here and take advantage quickly if you’re interested.

That’s all for now. Don’t forget, the new (fifth) season of Longmire is available today on Netflix (read our review of the previous seasons on Blu-ray here). Have a great weekend!

Bits #BD Review – @timsalmons catches up with the 3-D Film Archive's efforts by resurrecting the 1953 #Western WINGS OF THE HAWK—now available on #Bluray with a wonderful #3D restoration from @KLStudioClassic. @BillHuntBits thedigitalbits.com/item/wings-of-…