Displaying items by tag: The Harder They Come

All right, we’ve got a news roundup and a couple of updates for you today...

First, Tim has posted a new review of Book of Monsters on Blu-ray from Dread and Epic Pictures. Also, Dennis has turned in his thoughts on Michael Haneke’s Funny Games (1997) on Blu-ray from Criterion. Enjoy!

The big news today is that Warner Archive has just officially announced the Blu-ray release of Jonny Quest: The Complete Original Series (1964). We hear the set is expected next month (street date TBA). The 3-disc set will include all 26 original episodes newly-remastered in full HD from the original film elements. Audio will be 2.0 DTS-HD Master Audio. Extras will include the Jonny Quest: Adventures in Animation featurette, a special version of the Double Danger episode with Quest Files facts and trivia, the Jonny Quest Video Handbook, and a Vintage P.F. Flyers Sneaker Commercial. You can see the cover artwork at left. [Read on here...]

Claire Denis’ High Life, Once Upon a Time in the West: The Book, and a few Thoughts On Endings

So... did you guys happen to see/enjoy/rage at last night’s penultimate episode of Game of Thrones? It was doozy, that’s for sure. But more on that in a minute (and I assure you, there will be no spoilers).

First, we have some new Blu-ray reviews for you... Tim has posted his thoughts on Nicolas Roeg’s Track 29 (1988) in a new Region B Blu-ray release from Indicator and Powerhouse Films. Meanwhile, Dennis has offered his thoughts on Tom O’Horgan’s Rhinoceros (1974) from Kino Classics.

Now then, in release news, Lionsgate has just announced the Blu-ray, DVD, and Digital debut of Claire Denis’ new high-concept science fiction film High Life on 7/9. I actually hope they’ll consider releasing this in 4K, because the film’s visuals certainly deserve it. In the meantime, the Blu-ray will include 2 featurettes (Audacious, Passionate, and Dangerous: Making High Life and Visualizing the Abyss: The Look of High Life) with audio in 5.1 DTS-HD MA. You can see the cover artwork at the left and also below. [Read on here...]

The Harder They Come, Terms of Endearment, Mama's Family & Trek Into Darkness update 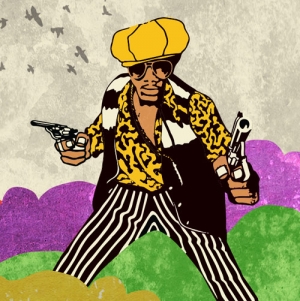 Okay, just a quick one today to round out the week...

First up, check this out... Syndctd Entertainment and International Films Management are releasing Perry Henzell’s cult classic The Harder They Come back into theaters for a limited time in the U.S. and U.K. starting on 9/5.  The film stars Jimmy Cliff.  Then later this year, Xenon Pictures is releasing the film on Blu-ray Disc.  All this is in honor of the film’s 40th Anniversary.  More information is available here.  Remember: “The hero can’t dead till the last reel!”

Warner Home Video is releasing the Paramount catalog title Terms of Endearment on Blu-ray Disc for the first time on 12/3 (SRP $19.98).  […]