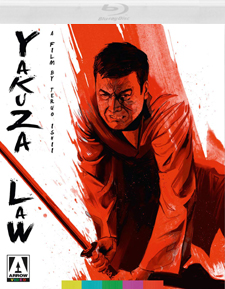 Hacking and slashing with samurai swords onto screens in 1969 (and rarely seen outside of its native homeland), this deliriously blood-soaked action extravaganza puts a capital V in Violence. Incredibly gory, even by today’s standards, it fails to waste any time in lopping off appendages, gouging out eyeballs, or stabbing mid-sections with crimson-saturated glee. Even the opening credits let us know right away what we’re in for with a montage of the film’s various fighting and torture scenes, including several that aren’t even in the final film – just for good measure.

On the flipside, the three stories take a backseat to the action and aren’t that interesting. The conceit of observing horrendous violence at the hands of criminals from different points in time means that many of the characters are usually doomed in one way or another. At the same time, it doesn’t matter that much because it’s clear that this isn’t a movie that’s concerned much with telling stories that will broaden anyone’s horizons. It’s a radical piece of cinema from a time when the Japanese film industry was releasing a surplus of similar movies. In other words, you’re either going to dig it for what it is or hate it for what it isn’t.

There’s also clear evidence of a guided hand at the wheel throughout. Fast cutting, odd angles, and careful staging are all on full display. One sequence in particular of a character who is frantically running in search of another character cuts back and forth between various setups of the same shot, which gives the scene a frenetic and effective feel. Moments like it are just as memorable as the aforementioned carnage, but mostly unappreciated.

Many continue to accuse the film of being nothing more than a torture fest, which is justifiable, but Yakuza Law is much more than what’s on the surface, giving it an edge over other films from this period in time which were also loaded with gore – including the films of Herschell Gordon Lewis wherein the blood and the gore was entirely the point, but featured little to no visual flair.

Arrow Video presents the film on Blu-ray with a presentation supplied by Toei in the original aspect ratio of 2.35:1. Like most of their transfers, it’s solid and film-like with minimal grain, strong color reproduction, decent black levels, good contrast, and little to no damage leftover. Unfortunately, it appears to contain density issues, whether they’re inherent to the source or created during the original scan. There’s a breathing quality to the images, which are more pronounced in some scenes than others. It’s the only flaw in an otherwise spotless presentation.

The audio, which is featured in Japanese mono LPCM with optional English subtitles, is flat and narrow, but dialogue is always clear and vintage sound effects have only minimal impact. The score is actually more robust than the other elements, having a much rounder quality. Leftover damage includes only mild hiss – crackle, distortion, and dropouts are never an issue.

Extras include an audio commentary by author and Japanese film expert Jasper Sharp, who doles out an abundance of information about the film, its cast, and its crew; Erotic-Grotesque and Genre Hopping, a vintage but newly-edited 48-minute interview with director Teruo Ishii, discussing the various and differing films of his career; an image gallery containing 12 images of promotional shots and the film’s original Japanese poster; and a 24-page insert booklet containing the essay The Long Harm of the Law by Tom Mes and presentation details.

Despite its lack of compelling storytelling, Yakuza Law still manages to eke out entertainment value by the sheer fascination, morbid or otherwise, of its many violent sequences. The mayhem is never really called for, even in the most extreme of circumstances, but it’s the film’s bread and butter – and if you’re into that kind of thing, then Arrow Video’s Blu-ray release of the film is for you.