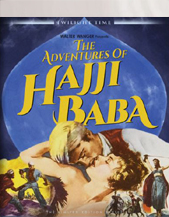 For fans of sword and sandals epics, The Adventures of Hajji Baba is another offering with a twist. Given a touch of comedy by director Don Weis, who was known for light-hearted films, it was the first of three CinemaScope ventures made by Allied Artists Pictures. It features the tale of Persian barber Hajji (John Derek), who leaves his father to seek his fortune and unexpectedly gets involved in a mission to escort a beautiful princess (Elaine Stewart) to her wedding. Zany adventures ensue as the pair bicker and argue with each other, but ultimately fall in love.

The Adventures of Hajji Baba is a cheesy, but exotic film with many campy moments and a lot of scantily-clad women. Thomas Gomez is great as Osman Aga, giving his character the most energy out of everyone in the cast and outshining the film's two stars. There’s also a great score by Dimitri Tiomkin, as well as a musical number by Nat King Cole that will haunt you for days, if not weeks.

Twilight Time gives The Adventures of Hajji Baba a solid Blu-ray debut. The HD master provided by Sony is spectacular with rich, bold colors. The scenery is just ravishing, highly-captivating and worth the price just to admire the lavish sets and the beautiful cinematography of Harold Lipstein – it’s certainly one of the film’s highlights. In the audio department, English 5.1 and 2.0 DTS-HD tracks are available with optional subtitles in English SDH. Both tracks are flawless, but between the two, the stereo track is a bit stronger with richer-sounding dialogue. The score and action scenes also sound more intense.

Extras are limited to an isolated music and effects audio track, the original theatrical trailer, a scroll-through of the current Twilight Time catalogue, and 8 pages of liner notes by Julie Kirgo. Like most of Twilight Time’s Blu-rays, this release is also Region Free.

The Adventures of Hajji Baba is an amusing film, but I wouldn’t call it a timeless classic. Still, those interested in the genre should give it a spin. If nothing else, the viewing experience will be at its very best.