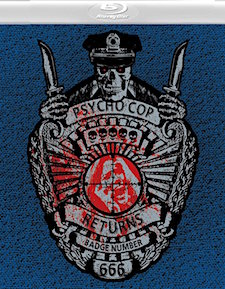 Long before Adam Rifkin helmed movies like The Chase and Detroit Rock City, he cut his teeth on movies under the pseudonym Rif Coogan, and Psycho Cop Returns (AKA Psycho Cop 2) just happens to be one of them. This raunchy exploitation horror extravaganza shows us what happens to a group of freewheeling desk jockeys who decide to throw a wild bachelor party in their office building after hours, complete with strippers, booze, and stag movies. That is, until Psycho Cop shows up to slaughter them all. Everything’s tossed into the pot, including a heaping helping of T&A and gore, real world event satirization, and a killer who simply can’t help himself but throw out a barrage of one liners at all of his victims.

The main thing that Psycho Cop Returns gets major points for is that it’s not just schlock, but SUPER schlock, of the highest caliber. Most of the performances from everyone involved are over-the-top and god-awful, which I can see fans of good/bad movies appreciating. Normally, I’d be right amongst that group, but I found the movie so effortlessly annoying at times that it was difficult not to pick up the remote control and hit fast forward, particularly during most of the first half. Robert R. Shafer, the policeman in question, commits to the part, and the movie really goes for it in a way that you kind of have to admire, despite yourself. Some may find Psycho Cop Returns to be an exploitation revelation, which isn’t necessarily a bad thing. It’s goofy and it really tries, which is its best quality, whether you like it or not.

For Vinegar Syndrome’s Blu-ray debut of Psycho Cop Returns, their presentation has been scanned and restored in 2K from 35mm vault elements in the movie’s original, uncensored, and director-approved form. For a film that’s long been languishing in full screen presentations for most folks who originally saw it, likely on cable, this transfer is terrific. It’s very natural-looking with solid grain levels and a strong encode, revealing an amazing amount detail (I direct you to the film’s sweat-soaked sex scene for further proof). The color palette is never eye opening, but it’s quite good for what it is. It’s a dark film, and the black levels and shadow detail reflect that, the latter never being immensely impressive because of the built-in crush. Overall brightness and contrast levels are fine with what there is to work with as well. It’s also a stable presentation with not much damage other than some speckling. The audio comes in two options: English mono and stereo DTS-HD. Of the two, the 1.0 track is (surprisingly) the way to go. Comparatively, the 2.0 track, for some reason, puts the dialogue somewhere between the center and right speaker for the duration, which I didn’t particularly care for. The mono is fully centered, although it’s sometimes a busy track. It isn’t quite flat per se as the music tends to be pretty strong and the stock sound effects jump out with some punch, but it feels a little crowded at times. It’s never a major problem, and of the two tracks included, it’s the more desirable listening choice. Subtitles are also included in English SDH.

For the extras selection, there’s some excellent material worth diving into, which I personally found more enjoyable than the movie itself. There’s an audio commentary with director Adam Rifkin, which is moderated by Elijah Drenner; Habeas Corpus: The Making of Psycho Cop Returns, which is an hour-long documentary that talks to many members of the cast and crew; The Victims of Vickers – an interview with special effects artist Mike Tristano; and a DVD copy of the movie.

For all the things that Psycho Cop Returns is, it’s certainly not a sequel that requires you to see its predecessor before you watch it. There’s essentially no connection other than Psycho Cop himself. So if you’re in the mood for a sleazy piece of early 90s gonzo horror cinema, Vinegar Syndrome has got your hook up... and then some. This Blu-ray is another fine release from them.