Once Upon a Time in the West (Tim's review) 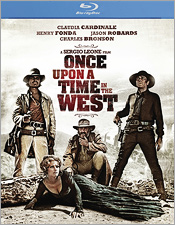 Sergio Leone, one of the greatest filmmakers ever to come out of Italy, had a sparse but rich output of material in the seven films that he made.  It would certainly be a tough task for any follower of his work to pick a favorite.

Everything that he made was so abundant with the grandest of filmmaking techniques and philosophies.  His ‘Man with No Name’ trilogy (A Fistful of Dollars, For a Few Dollars More and The Good, The Bad & The Ugly) was very successful and ushered Leone in as one of cinema’s true greats, but it was Once Upon a Time in the West that would turn out to be held in higher esteem than the rest of his work, despite its commercial failure.  The film is notorious for containing long, leisurely scenes with very little dialogue and little to no action.  Vast landscapes with interesting characters directly in the foreground and right next to the camera helps to separate this film from the standard western composition at the time.  The film is also an amalgam of homages to the classic westerns of the past, creating a fusion of themes, styles and settings that evoke the idealized look of a western, while at the same time not conforming to its obligatory structure.  The very fact that Henry Fonda plays the villain, a ruthless killer for hire, is evidence enough of Leone working to turn the genre on its head.

However, the biggest controversy surrounding the film before and after its release was its length.  Released at its full 165 minute running time, the negative reception it initially received panicked the studio into cutting 20 minutes out of it before its release.  Entire scenes were lifted completely out of the body of the film, which consequently created confusion during certain scenes.  Leone himself even removed a portion of the opening scene that was later reinstituted to strengthen the narrative.  Despite all of this meddling, the film still wasn’t a commercial success.  A surprise to all, considering that Leone’s ‘Dollars’ trilogy had seen great success in both Europe and the United States.  Many years later, Once Upon a Time in the West was lauded by both critics and film fans the world over.  To this day, it remains on many ‘top ten best westerns’ lists.  Its unconventionality, haunting score and great performances by its amazing cast have made it one of the all time great films of its era.

For the release of the film on Blu-ray, Paramount has gone to a great deal of trouble and included both the newly restored and original theatrical versions of the film.  You may choose to watch either version separately via seamless branching.  The presentation is fantastic, but not without some minor issues.  The film’s nearly three hour running time doesn’t seem to have enough space to breathe on the disc, and as a result, the image isn’t quite as sharp as one would hope.  Things aren’t totally amiss though.  The colors are represented much better than previously seen on DVD.  They appear much cooler without retaining any sort of glow or tint.  Everything looks much more accurate, with contrast and brightness at perfect levels.  Grain isn’t quite as textured and refined, making it look a bit spotty and muddled in certain areas of the frame, but the overall surface look is much crisper than before and reveals previously hidden detail in the image.  By and large, this isn’t the best transfer out there, but it’s the best the film has ever looked on any home video format and should keep complaint to a minimum.  As far as the audio is concerned, there are four options: English 5.1 DTS-HD, English Restored Mono Dolby Digital and French & Spanish Mono Dolby Digital tracks.  Normally, I would recommend the Mono track on classic releases (if only for the simple fact that it was the original intention of the director).  However, in this case, the DTS track breathes a bit more life into the soundtrack.  It isn’t a fantastic surround experience, but it does give the soundtrack a wider landscape and a bit more edge, particularly the sound effects and the score.  Everything is a little clearer and cleaner on this track, but the lack of envelopment makes it a tough call.  If you want a cleaner-sounding experience, I’d say go with the DTS track.  If you’d rather go old school (like me), just stick with the Mono track.  There are also subtitle options for those that might need them in English, English SDH, French, Spanish and Portuguese.

Those looking to upgrade will be happy to learn that nearly all of the supplemental material from the previous Special Collector’s Edition DVD release has been carried for this release.  First up, there’s the audio commentary with directors John Carpenter, John Milius & Alex Cox, film historians Sir Christopher Frayling & Dr. Sheldon Hall and some of the cast & crew members.  Next are a set of four great featurettes, the first three of which form a sort of ‘Making of’ documentary: An Opera of Violence, The Wages of Sin, Something to Do with Death and Railroad: Revolutionizing the West.  There’s also an image comparison featurette: Locations: Then and Now, a Production Gallery and the film’s theatrical trailer in HD (the latter of which being the only new inclusion).  Material that didn’t make it onto this release is the cast profiles and the optional subtitles for the audio commentary.  Very minor subtractions that most won’t be dearly missed, but if you’re a completist, I’d say hang onto your DVDs just in case.  Unfortunately, no new materials have been dug up, including the longer scenes might still exist, or at the very least, any assemblages of the lost scenes that didn’t make it into any version of the film.  There’s also some interview footage with Sergio Leone and Claudia Cardinale from an early Italian DVD release that I would like to have seen included, but overall, I’m happy that nearly all of the previously-released extras has been carried over.

The bottom line here is that Once Upon a Time in the West is a very different experience set within the western genre.  It takes all of the great things that we love about it, mixes them up and re-introduces them in different and inventive ways to create a new kind of western experience.  Sergio Leone has gone down in history as the king of the spaghetti western, and this Blu-ray release should go down as one of the most enjoyable Blu-ray releases of the year.  Those looking to upgrade would be right to do so, and those looking to introduce themselves to the film can’t go wrong by picking this one up.  Very, very recommended.