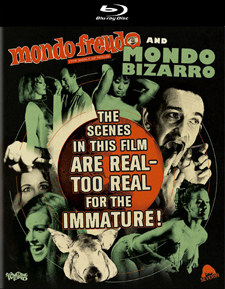 Long before the days of Youtube, if you wanted to experience the sights and sounds of people and places that were outside of regular entertainment channels, your options were limited to magazines, books, and occasionally, documentaries. Two selections of the latter items are presented here on Blu-ray for the fist time: Mondo Bizarro and Mondo Freudo.

Both films focus on a narrated view of the depraved and little seen areas of society and the world at large. In Mondo Bizarro, we’re given glimpses of Japanese massage parlors, Nazi torture theater, voodoo rituals, mail-order underwear, glass eating, nude photography, Arabian slave trading, and even a man who can withstand all pain and disease – and proving it by lying on a bed of nails without so much as a drop of blood. Other peeks behind the curtain include nude sunbathing, homosexual prostitution, war protesting, and hidden cameras in dressing rooms.

In Mondo Freudo, the spotlight is shined upon the secretive sexual activities of both teenagers and adults. Among these areas of interest, we see topless Watusi dancing, prostitution in London, a Japanese sadism nightclub, late night seaside trysts, and German mud wrestling contests. Some of the more provocative footage involves a Black Mass ritual and Tijuana slums and brothels, the latter of which is more sad and depressing rather than titillating.

While some of this material is fairly tame due to decades of exposure to many of the same or similar events (not to mention condescending in a biased and outdated manner toward many individuals’ own personal ways of living), some of it can still manage to be offensive. In other words, the squeamish, the close-minded, and the easily disgusted need not apply here.

Both Mondo Bizarro and Mondo Freudo come sourced from new transfers that have been “scanned in 4K from the original Something Weird 35mm vault negatives.” Severin Films are usually known for their “warts and all” approaches to their presentations, usually leaving behind all of the leftover frame damage, such as scratches, speckling, tears, staining, and tape splices between shots, but these presentations are in relatively fine shape. There is some mild damage include some scratches (some intentional to hide the identities and names of certain persons and organizations), but everything is healthy and organic with little to no instability. Both transfers contain a mix of color and black-and-white footage, offering plenty of clarity and good contrast regardless. There’s actually not all that much to complain about.

The audio for both films is presented on English 2.0 mono DTS-HD tracks, and like their video counterparts, are not in terrible shape at all. I did notice a couple of dropouts here and there, but for the most part, everything is represented quite well. The narrators are always heard clearly, but as per the original presentations, footage is not always synced with the sound, making it more of a collage at times. Subtitles are also included in English SDH.

Extras include a full frame trailer for Mondo Bizarro (bearing the Something Weird Video acronym watermark); audio commentaries on both films featuring trash film historian Johnny Legend and memorabilia collector Eric Caidin; The Cadaver is Infinity: Bob Cresse, Lee Frost, and the Birth of American Mondo, a 28-minute interview with Temple of Schlock’s Chris Poggiali; and a full frame trailer for Mondo Freudo, presented in HD from a faded print.

Folks familiar with James A. Fitzpatrick’s Traveltalks shorts, but also unprejudiced to things outside of normal consumption, are bound to find something of interest in both Mondo Bizarro and Mondo Freudo. Not only are they snapshots of a time and place, but also a window into an era before the internet would make them mostly obsolete. Severin Films’ double feature package brings them to high definition with a dash of sleaze and a heavy dose of conservation.