New announcements from Arrow Video and Kino Lorber, plus a look at the new Africa Screams restoration & more 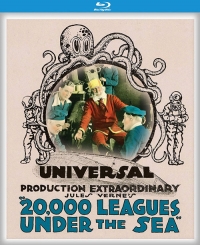 We’re kicking things off today with a new Blu-ray review from Dennis...

He’s taken a look at Jon Avnet’s Three Christs (2017) now on disc from IFC Films and Shout! Factory. The film stars Richard Gere, Peter Dinklage, Bradley Whitford, and Walton Goggins. Do give it a look.

Meanwhile today, Arrow Video US has announced its June 2020 Blu-ray slate, which is set to include François Reichenbach’s American as Seen by a Frenchman on 6/2, Harley Cokeliss’ Dream Demon and Tomu Uchida’s The Mad Fox on 6/23, and a new Limited Edition of Sergio Corbucci’s Django on 6/30.

From Arrow’s announcement: “The film is presented here in an exclusive new restoration with a wealth of extras including the newly restored bonus feature Texas Adios, which also stars Franco Nero, and was released as Django 2 in several territories.” [Read on here...]

Here’s great news: The standard 1-disc edition Arrow’s Flash Gordon 4K release is now just $19.99 on Amazon (note that the 2-disc Limited Edition with extra swag is priced $59.99.) Both street on 8/18. Get your pre-orders in!

Also, we mentioned a while back that the 3-D Film Archive and ClassicFlix were working on a new 4K restoration of Abbott and Costello’s classic Africa Screams (1949) from 35mm nitrate elements. Well, here’s a look at the trailer! Can’t wait to see it on Blu-ray...

In other news today, our old friend Scott Saslow—a freelance graphic designer who has worked on Blu-ray releases for Arrow Video and Kino Lorber—is doing an AMA on Reddit tomorrow (at 4PM Eastern) here at this link. So do check that out if you’re interested.

And finally today, Tim has uncovered a cool 2 minute segment from Entertainment Tonight in 1994 about John Carpenter’s Escape from New York. It’s sourced from an early VHS and Laserdisc release of the film. You’ll find that here on his YouTube channel (which we highly recommend—he’s got all kinds of cool stuff over there)...