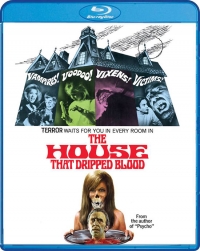 First up, Tim has posted a review of Ian Curteis’ The Projected Man (1966) on Blu-ray Disc from our friends at Scream Factory. Do give it a look.

Also today, our own Michael Coate has just posted a new History, Legacy & Showmanship column celebrating the 50th anniversary of John Boorman’s Point Blank with historian Dwayne Epstein. It’s a fun interview, so be sure to check it out.

In announcement news today, Lionsgate has set A24’s The Florida Project for Blu-ray and DVD release on 2/13, followed by The Disaster Artist on both formats on 3/13. [Read on here…]

Scream Factory has just announced Amicus title The House That Dropped Blood (1971) for Blu-ray release on 5/8. Scream has also set Doctor Blood’s Coffin (1961) and The Vampire and the Ballerina (1960) for release on Blu-ray on 5/15 and 5/22, respectively.

Kino Lorber has revealed that Paul Verhoeven’s Spetters (1980) is coming to Blu-ray and DVD later this year (street date TBA).

And here’s something exciting: Umbrella Entertainment is bringing back its Drive-In Delirium series on Blu-ray with the newly-announced April release of Drive-In Delirium: The New Batch. This third volume in the series will include “6 hours of non-stop sex, violence, vehicle destruction, cockamamie cosmic carnage (not to mention an overload of Bronson badassness)” in the form of fully remastered film trailers. You can watch the promo for the release here:

Also today, it appears that Disney’s official announcement for Star Wars: The Last Jedi will happen on 2/20, based on retail solicitation artwork we’ve seen over the weekend.

And speaking of Star Wars, you’ve probably now seen the full trailer for Disney and Lucasfilm’s Solo: A Star Wars Story, but if you haven’t, here’s a look...

That’s all for now. Back tomorrow. Stay tuned...

RT @BillHuntBits: Bits #4K REVIEW IN PROGRESS – @BillHuntBits checks out Peter Jackson’s THE LORD OF THE RINGS TRILOGY in #UltraHD from @WB…

Heads Up: Our friends at #MVD are having a #BlackFriday and #CyberMonday #Blowout #sale from today through December 1st on many of their #Bluray and #DVD releases. Up to 80% off SRP. Check it out! mvdshop.com/collections/bl…

RT @BillHuntBits: Oh my! ”In the lands of Middle-earth, legend tells of a Ring...” #4K #UltraHD #LOTR #TheHobbit