First up today, our own Russell Hammond has just posted the weekly Release Dates & Artwork update with all the latest Blu-ray, DVD, and 4K cover artwork and Amazon.com pre-order links. Don’t forget, anytime you order titles through our links you’re helping to support our work here at The Bits and we appreciate it!

Now then... in new release news today, Paramount has officially announced Robert Zemeckis’ Allied for release on Blu-ray, DVD, and 4K Ultra HD Blu-ray on 2/28, with the Digital HD release expected on 2/14. The WWII thriller stars Brad Pitt and Marion Cotillard. Extras on the Blu-rays will include 10 behind-the-scenes featurettes (among them The Story of Allied, From Stages to the Sahara: The Production Design of Allied, Through the Lens: Directing with Robert Zemeckis, A Stitch in Time: The Costumes of Allied, ’Til Death Do Us Part: Max and Marianne, Guys and Gals: The Ensemble Cast, Lights, Pixels, Action! The Visual Effects of Allied, Behind the Wheel: The Vehicles of Allied, Locked and Loaded: The Weapons of Allied, and That Swingin’ Sound: The Music of Allied). You can see the cover artwork to the left and below. [Read on here…]

20th Century Fox Home Entertainment has announced the Blu-ray and DVD release of Miss Sloane, starring Jessica Chastain, on 3/21, with a Digital HD release expected on 3/14. Extras will include the Lobbying: Winning by Any Means featurette.

Fox has also announced the DVD only release of The Americans: The Complete Fourth Season on 3/7, with extras set to include deleted and extended scenes.

Universal Studios Home Entertainment has set the comedy Almost Christmas for release on Blu-ray and DVD on 2/7, with a Digital HD release due on 1/24.

Meanwhile, Funimation has announced that Makoto Shinkai’s new animated classic Your Name is going to be released in theaters here in the States on 4/7. That will be followed by the U.S. Blu-ray, DVD and Digital release of the film later in 2017.

PBS Distribution has announced the 1/31 Blu-ray and DVD release of Masterpiece: Victoria.

Lionsgate has set Man Down, starring Shia LaBeouf and Gary Oldman, for release on Blu-ray and DVD on 3/7. The Digital HD release is expected on 2/21. Lionsgate has also announced that Adam Smith’s Trespass Against Us, starring Michael Fassbender and Brendan Gleeson, will arrive on Blu-ray, DVD, and Digital HD on 3/7.

Here’s a look at the Blu-ray cover artwork for all of Criterion’s April Blu-ray titles, along with Well Go USA’s new Phantasm Collection box set, Fox’s Miss Sloane, and Paramount’s Allied on 4K Ultra HD Blu-ray. Click on each to pre-order on Amazon.com... 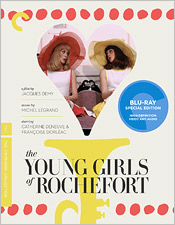