The Writers’ Room: Remembering “The Dick Van Dyke Show” on its 60th Anniversary 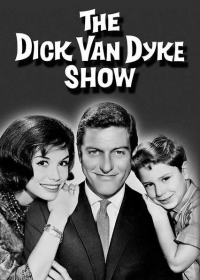 The award-winning series, which originally aired on CBS from 1961 through 1966, revolved around Rob and his co-workers as the writing staff of a television show and Rob’s home life with wife Laura and son Ritchie.

The series—created by Carl Reiner (2000 Years with Carl Reiner and Mel Brooks, The Jerk, All of Me) and memorably featuring Rose Marie as Sally Rogers, Morey Amsterdam as Buddy Sorrell, Larry Mathews as Ritchie, Richard Deacon as Mel Cooley, and Carl Reiner as Alan Brady—premiered 60 years ago this autumn, and for the occasion The Bits features a Q&A with television historian Herbie J Pilato who reflects on the series appeal, impact and legacy six decades after its debut. [Read on here...] 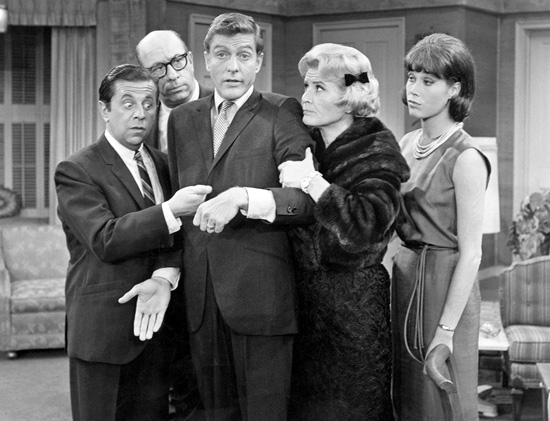 Herbie J Pilato is a writer/producer/TV personality who is the author of several pop-culture/celebrity biographies including Mary: The Mary Tyler Moore Story and Twitch Upon a Star: The Bewitched Life and Career of Elizabeth Montgomery. He is a features writer for the Television Academy and Emmys.com, recently served as a consultant and cultural commentator on CNN’s heralded eight-part series, The History of the Sitcom, and is the host of Then Again with Herbie J Pilato, a classic TV talk show streaming on Amazon Prime and Amazon Prime UK. For more information, visit www.HerbieJPilato.com.

Herbie kindly spoke to The Bits about the appeal and legacy of The Dick Van Dyke Show. (He was previously interviewed for this column’s retrospectives on The Flintstones,The Mary Tyler Moore Show, The Twilight Zone, The Brady Bunch, Leave it to Beaver, Star Trek, I Dream of Jeannie, and Bewitched.)

Michael Coate (The Digital Bits): How do you think The Dick Van Dyke Show should be remembered on its 60th anniversary?

Herbie J Pilato: The Dick Van Dyke Show was ahead of its time, in execution and display of three-dimensional characters. Misled 1990s viewers may think they’re screening a contemporary sitcom that is being filmed in black and white, and accuse it of being artsy. But no way. It isn’t artsy. It’s art. As with any cultural masterpiece, albeit TV classic, The Dick Van Dyke Show’s appeal rests with its stoic period representation, social influence, and timeless appreciation of non-insulting, marriage-encouraging, friendship-bonding, and work-ethic-inducing scripts.

The Digital Bits: Can you recall when you first saw The Dick Van Dyke Show?

Herbie: I was first introduced to The Dick Van Dyke Show via daytime reruns on CBS. I grew up in the 1960s in Rochester, New York, and attended St. Peter and Paul’s parochial elementary school, the adjoining church for which was right next to the famed Susan B. Anthony House. Anyway, the students of St. Pete’s got to go home for lunch, and my house was relatively close to school. And my father or my aunt would drive to pick me up and take me home for lunch, and then take me back to school afterward. We had an hour for lunch, and I would watch reruns of Bewitched, That Girl, and The Dick Van Dyke Show, while eating the hamburger and Lipton Noodle soup that my mom made for me and in the earliest years, my sister, too. She’s about six years older than me, but there we were, having our lunch, sitting in front of the TV during the day, in our Catholic School uniforms, watching Rob and Laura on The Dick Van Dyke Show.

The Digital Bits: In what way is The Dick Van Dyke Show significant?

Herbie: A happily-wedded husband and wife would watch The Dick Van Dyke Show during its initial run (on CBS from 1961 to 1966), and be gleefully vindicated. Upon viewing the comic adventures of Rob and Laura Petrie (as played by Van Dyke and Mary Tyler Moore), the merry married would turn to one another, and vow, “Now there’s an attractive, upper-middle-class couple. He has a great job. She enjoys being a housewife and mother (to Larry Mathews’ little Richie). But, sometimes, they act kind of goofy. Just like us, honey. That means they’re not perfect, which means we aren’t either. And that’s okay.”

The Digital Bits: Which character is your favorite?

Herbie: I gotta go with Rob.

You’d be hard-put to reject the handsome Rob Petrie, a refined, respected, and well-established husband and father fashion staple with a good job (as a comedy writer for the fictional TV variety hour starring Alan Brady, played by Van Dyke Show creator Carl Reiner). But he’s also the guy who’s the little kid at heart, unafraid to admit that he doesn’t have a workroom that’s seething with machismo, courageous enough to reveal that he’s always wanted to be Perry Mason or an operative for the FBI. He’s in touch with his feminine side, that is, his wife, his prettier better-half; the one to whom he’s not embarrassed to divulge emotions or admissions of physical inferiority (Laura once flipped a drunk in a bar in self-defense, when Rob, alas, just flipped).

There’s simply not a more likable, affable, pleasant, and physically and intellectually funny and multi-faceted character in the history of television situation comedy. And Dick Van Dyke’s incomparable, immense and diversified talent as an actor, dancer, and singer certainly lends to that deduction.

That said, Laura is cultivated, sophisticated, and, like her twin-TV-counterpart Mary Richards from The Mary Tyler Moore Show, she “can turn the world on with her smile.” With her elegant intelligence and sometimes (but not too often) subtle irreverence, her appeal with viewing husbands and wives alike becomes multi-dimensional. In a good way. Right before our eyes. With her Capri pants and Jackie Onassis hair, Laura established a model trend in the fashionable 1960s, in apparel and demeanor. She and Rob were the first self-effacing hipsters of the television age. They made it okay to laugh at themselves, in effect—us—ourselves. They allowed humor to morph into an attractive trait, instead of an inopportune burden

Friends and co-workers of the Petries were also a milestone, by nature. Rob’s underwriters, so to speak, for the Brady show, Buddy Sorrell (Morey Amsterdam) and Sally Rogers (Rose Marie), were joke-meisters. But, they too, had other sides. Buddy was the first real character of the Jewish faith to have ever been presented on a mainstream television situation comedy. Sally was just as groundbreaking as the first female character on a TV show, and actually considered “one of the guys.”

When she did behave in a way that was then considered more acceptable for a woman, Sally still waxed more dimensional. She just didn’t cry. She dealt with her tears. Ms. Rogers explored her lack of knack to find the love of her life but, still, she survived. She had her own apartment, was a member of a male-dominated workforce, and was independent. She, not Buddy, was the true threat to the hen-pecked Mel Cooley (Richard Deacon).

At home, Rob and Laura lived next door to dentist Jerry Helper (Jerry Paris), and his meddlesome, though caring, wife Millie (Ann Morgan Gilbert, later of The Nanny). At work, around his in-home dental chair, Jerry was a sincere and trusting professional. Once across the fence with Rob, however, he would let loose and get silly. Along with his fellow Van Dyke characters, Dr. Helper adapted to his situation. He wasn’t always a dentist or ever a neighbor. He wasn’t always serious or ever laughing. He was a little everything, the good with the bad, all the time, just like real people.

But again, out of all of the characters on The Dick Van Dyke Show, my favorite is Rob.

The Digital Bits: Which are the series’ standout episodes?

Herbie: So many, but certainly all the episodes that featured musical and dance numbers, beginning with the pilot, The Sick Boy and the Sitter, Oh How We Met The Night That We Danced, The Talented Neighborhood, The Twizzle, The Secret Life of Buddy and Sally, Somebody Has to Play Cleopatra, How To Spank a Star, and Too Many Stars.

Other great episodes include those in which Rob somehow interacts with the law, such as One Angry Man, The Cat Burglar, The Case of the Pillow, Dear Mrs. Petrie, Your Husband Is in Jail, You’re Under Arrest, Who Stole My Watch?, and The Man From My Uncle.

And further standout segments are Forty-Four Tickets, Punch Thy Neighbor, My Blonde-Haired Brunette, Empress Carlotta’s Necklace, Where Did I Come From?, What’s In A Middle Name?, Gesundheit, Darling, Don’t Trip Over that Mountain, Ray Murdock’s X-Ray, All About Eavesdropping, The Death of the Party, Big Max Calvada, Show of Hands, That’s My Boy??, Who and Where Was Antonio Stradivarius?, A Nice, Friendly Game of Cards, My Part-Time Wife, The Plots Thicken, Scratch My Car and Die, Body and Sol.

I also love the “scary” episodes like The Ghost of A. Chantz, and Long Night’s Journey into Day, and those with a Twilight Zone-like feel, such as I’d Rather Be Bald, Than Have No Head at All, Uhny Uftz, and It May Look Like a Walnut.

I mean, truly…there’s not a bad one in the bunch.

The Digital Bits: Which episode is your favorite (if you could name only one)?

Herbie: It’s a toss-up between Oh How We Met The Night That We Danced, and The Secret Life of Buddy and Sally, because both episodes feature amazing musical duet performances by Dick van Dyke and Mary Tyler Moore. And I’d also select Too Many Stars, which features my favorite musical number from the show, in general, The Doodlin’ Song, which is performed by Dick, Mary and guest-star Sylvia Lewis. But if I had to pick just one episode, I’d have to go with Oh How We Met The Night That We Danced, where Rob does a flashback story to the time he and Laura first met when he was in the army. And the dance number they perform together in this episode is just simply amazing…and magical.

The Digital Bits: Where do you think The Dick Van Dyke Show ranks among 1960s era sitcoms?

The Digital Bits: Do you believe The Dick Van Dyke Show is well represented on home video?

Herbie: Absolutely. The Blu-ray release has a terrific amount of extras, and audio commentaries, original commercials of the cast, and things of that nature. While, too, the overall physical execution of the episode transfers are simply pristine.

The Digital Bits: What is the legacy of The Dick Van Dyke Show?

Herbie: Its superior acting, writing, directing. The relationships between the characters. The performances of those characters by the actors. It’s just all simply superior television with an appeal that remains timeless.

In all, The Dick Van Dyke Show was ahead of its time, in execution and display of three-dimensional characters. Misled 1990s viewers may think they’re screening a contemporary sitcom that is being filmed in black-and-white, and accuse it of being artsy. But no way. It isn’t artsy. It’s art. As with any cultural masterpiece, albeit TV classic, The Dick Van Dyke Show’s appeal rests with its stoic period representation, social influence, and timeless appreciation of non-insulting, marriage-encouraging, friendship-bonding, and work-ethic-inducing scripts.

The Digital Bits: Thank you, Herbie, for sharing your thoughts about The Dick Van Dyke Show on the occasion of its 60th anniversary. 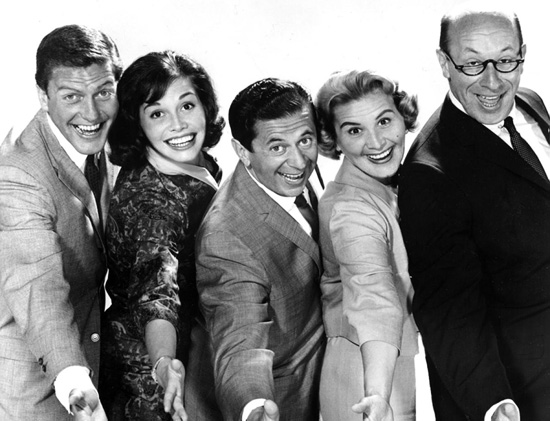 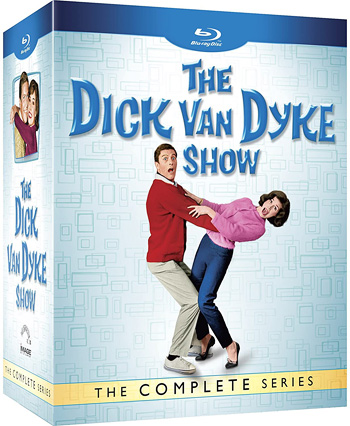