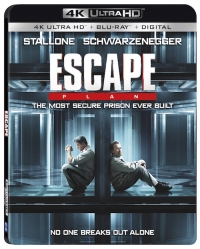 We’re starting today with four new disc reviews, including looks at Lionsgate and Summit’s Knowing and Sony’s Across the Universe in 4K Ultra HD by me (with our late great friend and Bits family member Barrie Maxwell), as well as Tim’s take on MVD’s Black Eagle: Special Edition and AGFA and Something Weird’s The Violent Years on Blu-ray. Enjoy!

Also today, we have an update on Stanley Kubrick’s 2001: A Space Odyssey. Warner Bros. has now officially announced (see this link) that the film is returning to theaters for a limited run in 70mm starting on 5/18 in honor of its 50th anniversary. The 4K Ultra HD pre-order page was recently pulled down from Amazon and now we know why: The street date had been listed as 5/8, but the title is now slated to arrive this fall, after the theatrical run. Both the 70mm return to theaters and the 4K release are being presented by director Christopher Nolan. [Read on here...]

Let me just say, if you’ve never had the chance to see 2001 in 70mm, be sure to take advantage of this opportunity to do so. I’ve been a fan of the film my whole life and have seen it many times in theaters and at home. But last year I had the chance to see it in 70mm at the American Cinematheque in Hollywood. Let me tell you, it’s a completely different experience. It’s startling and in your face. You begin to understand why audiences reacted so strongly to the film back in 1968 when they first saw it in 70mm. Don’t miss it.

One last note on 2001: While we’re waiting for the 70mm and 4K release, I thought this might be a great time to revisit a special feature article I wrote here on The Bits back in 2016 on great books about the film’s iconic science and production design, which still hold up fifty years later. So here’s Stanley Kubrick’s 2001: The Ultimate Trip in Print.

In announcement news today, Lionsgate and Summit Entertainment have just set Mikael Håfström’s Escape Plan for release on 4K Ultra HD on 6/5, starring Sylvester Stallone and Arnold Schwarzeneger. The disc will include both Dolby Vision HDR and Dolby Atmos audio, plus all of the previous special features. You can see the cover artwork above right.

Other 4K Ultra HD street date updates: Look for Forrest Gump, Terminator Genisys, and Tomb Raider (2018) on 6/12. And Steven Spielberg’s Ready Player One is coming to 4K in July (tentatively). Click on the title links to pre-order them on Amazon.com if available. Nick Park’s Early Man is also coming to BD/4K in the UK from Studio Canal on 5/28. No word yet on a US release.

In other news today, Lucasfilm has released a new Star Wars: The Last Jedi gag reel online for those who may be interested. You can watch that here via YouTube…

Finally today, our own Tim Salmons joins Tom Connors of Midnight’s Edge for a new installment of Talking Blu with The Digital Bits. In this episode, Tim talks about George Romero’s Night of the Living Dead, including the new Criterion Collection Blu-ray, as well as past editions. Enjoy!

That’s all for this week. For all those of you who celebrate, we wish you a lovely Easter and Passover weekend.